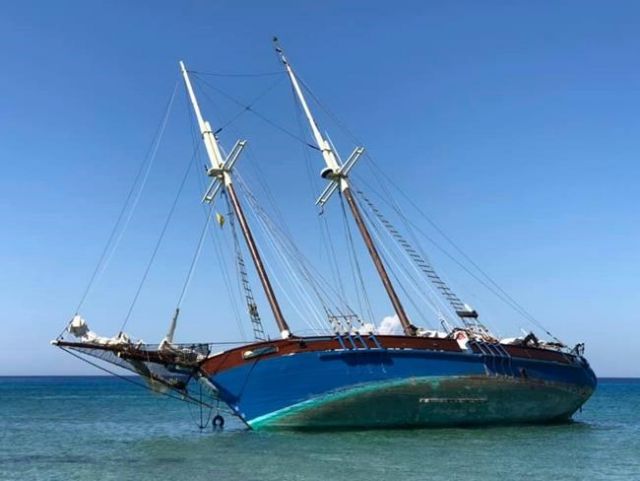 Cuban authorities have backed off a threat to seize the last surviving St. Lawrence River schooner, which ran aground on a beach in the Caribbean country on Jan. 27.

But the danger remains very real for the Grosse-Ile, the last seaworthy vessel of its kind and an important piece of the province's maritime heritage.

The ship's owner, Didier Epars, and his son Vincent were forced to ground the ship to avoid sinking after its engine failed during an intense storm.

"We deliberately ran aground at Maria la Gorda Cuba to save our lives," Epars wrote in a message to The Canadian Press, describing how he and his son swam ashore wearing life-jackets after the ship hit bottom.

His son has since left Cuba, but Epars remains "in custody" — albeit at a holiday resort that he said is actually run by the Cuban military. The resort is close to his ship, which he monitors from a distance when he can. The ship has nonetheless been repeatedly pillaged by thieves, he said.

"The Cuban army wants the boat in exchange for my freedom," Epars wrote. The Canadian Press obtained a handwritten letter bearing an official Cuban seal in which a military representative tried to bargain for Epars' release in exchange for the Grosse-Ile.

The vessel ideally would have been towed and repaired weeks ago, but Epars has encountered problems with his insurer. Concept Special Risks of the United Kingdom, the agency representing insurance company Great Lakes Insurance SE, says the insurance policy covers salvage costs up to a certain limit, but it wants Epars to arrange the towing and then seek reimbursement. Epars says he is not able to and is asking the insurers to make arrangements.

Last Friday, a Cuban tugboat that had not been requested by Epars or the insurer showed up. But in the end it turned back without dislodging the Grosse-Ile, saying only that "the negotiations failed." Information obtained later revealed that the salvagers had demanded 270,000 euros — approximately $410,000 — to extract the ship.

Adding to the precariousness of the situation, the insurance policy expired Feb. 26, although the insurer recognizes its responsibility for incidents that occurred while the policy was still in force.

The British company has told Epars it is looking for a towing firm outside Cuba, but it asked him to pay up front the amount of the deductible, US$140,000. The firm blames the delays on problems obtaining the necessary permits for a salvage operation in Cuba and insisted that the search for a tugboat was Epars' responsibility.

Built in 1951, the Grosse-Ile was used to provision the island east of Quebec City after which it was named. Epars bought it in 1992, but it needed to be almost entirely rebuilt. It took him 20 years to get the necessary permits to take on passengers, and in 2015 the schooner returned to the water, sailing between Quebec City and Montreal.