GoFundMe should be split 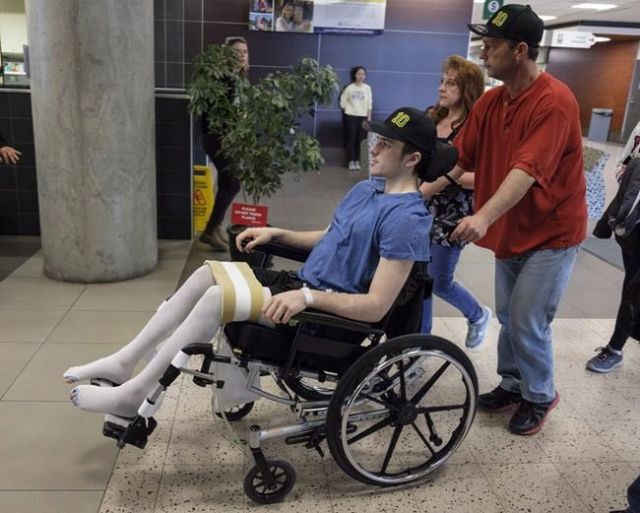 Photo: The Canadian Press
Humboldt Broncos hockey player Ryan Straschnitzki, who was paralyzed following a bus crash that killed 16 people, is wheeled by his father Tom as his mother Michelle, centre, walks beside in Calgary, Alta.THE CANADIAN PRESS/Jeff McIntosh

At least one family whose son was injured in the Humboldt Broncos bus crash says the millions raised by a GoFundMe campaign should be split evenly among the survivors and the families of those killed.

The fundraiser was created immediately after the April 6 accident and raised $15.2 million in less than two weeks.

The cash is being transferred to a new non-profit corporation called the Humboldt Broncos Memorial Fund Inc. and is expected to be distributed to victims in the coming months.

"I just say divide it, but that's just me," said Tom Straschnitzki, whose son Ryan was paralyzed from the chest down. "That's my opinion."

Sixteen people — including 10 players — were killed and another 13 players were injured a month ago when the junior hockey team's bus and a semi collided at a rural intersection.

No other families have offered an opinion, but officials with the team have said they will establish an advisory committee that will make recommendations on how the money should be doled out.

"They will end up going through a process that involves the courts," said Kevin Garinger, president of the Humboldt Broncos. "We want to do it fairly.

"We just want to make sure that if there is anyone who wants to or needs to dispute anything ... that they have a way of doing that."

A U.S.-based lawyer said he has suggested the team appoint an administrator and community advisory committee.

"The first step should be for the administrator to draft a protocol that details the eligibility criteria and the methodology for calculating individual awards," said Ken Feinberg, who has dealt with similar funds for victims of the Sept. 11 terrorist attacks and the Boston Marathon bombing.

"Then that draft document should be subject to a true public hearing in Humboldt open to everyone."

Once they received input, the administrator and committee could decide how much would go to each victim without involving the courts, he said.

In the U.S., Feinberg said it is the law that 75 per cent of any money is split equally among families of those who have died. The rest goes to the injured.

He said those who are the most seriously hurt, particularly if they are in a coma or are paralyzed, receive more.

"There's only one question to determine that — how long were you in the hospital?" he said. "If you are in the hospital for over a month, we would presume you were more physically injured in the crash than someone who was released after an overnight stay."

Feinberg said the protocol is simple, but it can get complicated because emotions often take over.

The Straschnitzki family said they just want to see the cash go to the people who need it.

Garinger said he's still hopeful that the funds can be distributed quickly.

"We don't expect it to take forever, or too long," he said. "I don't know how quickly our court system can work."

He said it's most important to ensure that everyone involved in the crash gets looked after.

"This was our family."