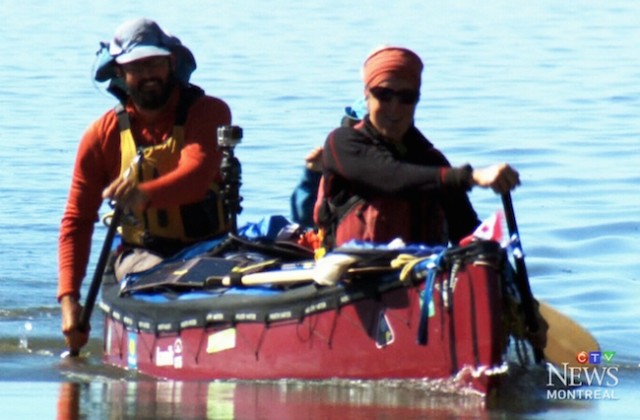 After a canoe trip spanning five provinces and nearly 5,000 kilometres of the Canadian wilderness, a Quebec family has come home.

Magali Moffat, her husband Benoit Gendreau-Berthiaume and their five-year-old son, Mali, were greeted by friends and family in Montreal's Cap-Saint-Jacques park on the weekend, after completing their five-month-long adventure.

The family moved to Edmonton five years ago so Gendreau-Berthiaume could complete his PhD in forest ecology.

A few years later, Moffat suggested they take a road trip to Montreal, but they were forced to change their plans when their car broke down.

"I said: 'Ben, hey, how about we paddle back home?'" Moffat recalled.

The voyage took a year-and-a-half to plan. The family set off this past spring.

To the relief of their family in Montreal, they posted videos, photos and updates on their website and social media.

"I was worried. That's why I was checking all the time, every day … sometimes 24 hours a day," said Moffat's father, Ian.

The family steered clear of Lake Superior due to safety concerns, but they still faced adversity. They were slowed by rough waters and strong winds while crossing lakes in Manitoba and Ontario.

And Gendreau-Berthiaume stepped on a nail during a portage in Manitoba.

"It was a 35 C day, it was super warm, we had a limited amount of water (and we) almost ran out until we found a little stream."

The couple also faced criticism for bringing five-year-old Mali along for the trip.

"We thought it was hard and we saw him just cruising and not complaining. (It was) … good motivation for us," Gendreau-Berthiaum said.

Mali said he was proud of what he accomplished on the trip.

The adventurous family plan to compile all their footage from their journey into a documentary, which they hope will inspire other families to explore the Canadian wilderness.

- With files from CTV