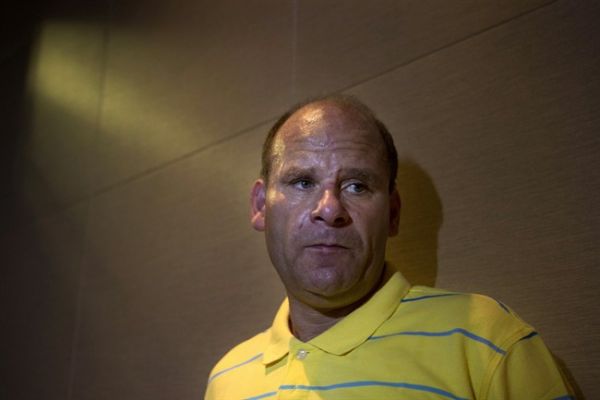 Fallen hero Steve Fonyo says he's putting his life back together after decades of drug abuse, crime and near homelessness culminated in a vicious beating earlier this year.

The once-celebrated runner is back in the spotlight with a documentary about his troubled life at the Toronto International Film Festival.

"Hurt" recounts the remarkable cross-Canada run he completed at age 19 in 1985, when the one-legged cancer survivor from Vernon took up a mission first attempted by Terry Fox.

Fonyo says he's still angry his Order of Canada was revoked in the years that followed, when a descent into addiction and financial ruin eradicated the public goodwill he'd earned as a teenage icon.

But he says revealing his woes to director Alan Zweig has helped him see things he needs to work on and that his life is much more stable today.

The documentary is in the running for an inaugural prize for artistically ambitious work. The winner will be announced on Sunday, the festival's final day.

"I need to better myself. And I'm doing that," Fonyo said Tuesday, the day after the film debuted in front of festival audiences.

"I was watching the film and you can't not notice there's things to work on, right? (So) I am."

For the documentary, the Toronto-based Zweig visited Fonyo at his home in Surrey four times over the course of a year. Zweig found him living in squalor, doing drugs and stealing car parts to make ends meet.

On the final day of shooting in February, Fonyo was beaten and stabbed in a devastating home invasion that landed him in hospital for several months.

His speech slurred and his gait even more laboured, Fonyo says he's working on getting healthier and stronger. He says he is drug-free and "a little bit more relaxed, more laid back."

And despite all the hardships, he says he still has the same resilient spirit that allowed him to complete his gruelling cross-Canada run.

"It took a while to figure that out."

He was a hero to people once before, and Fonyo says he'd like to be a hero again.

"I hope people learn from it," he says of the documentary.