Will groundhog see its shadow? 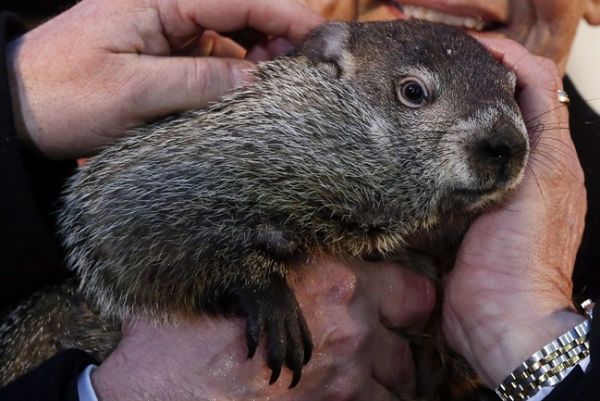 Photo: The Canadian Press. All rights reserved.
Punxsutawney Phil is held after emerging from his burrow last Feb. 2, on Gobblers Knob in Punxsutawney, Pa.

It's Groundhog Day tomorrow. Here's a few facts from out of the shadows:

LIGHTING CANDLES AND LOOKING FOR SPRING: Groundhog Day has its roots in the medieval European tradition of Candlemas. On a day in early February, people would light candles to brighten up a dark season and watch the weather to see whether or not spring was on the way. Many cultures adopted rhymes to sum up the Candlemas weather watching traditions. The most succinct is a Scottish couplet that says: "If Candlemas Day is bright and clear, There'll be two winters in the year."

HELP FROM THE HEDGEHOG: At some point hedgehogs were used to help predict whether spring would come early. Hedgehogs are not related to groundhogs. They have different hibernation patterns and are more likely to emerge from hiding in early February.

PHIL, THE FAMOUS FORECASTER: In the 19th century, German settlers living in the current state of Pennsylvania revived the tradition in their new home. Groundhogs became the stand-in for hedgehogs. The first official Groundhog Day trek near Punxsutawney, Pa., took place in 1888. Today it's the hub of Groundhog Day activities, and Punxsutawney Phil is the most famous of the furry forecasters.

IN CANADA, IT STARTED WITH A PARTY: Canada's marquee Groundhog Day event first took place in 1956 in Wiarton, Ont. It came about because a local resident wanted to throw a party for his friends and thought Groundhog Day was the perfect excuse. The tradition has evolved and Wiarton Willie is now Canada's leading four-legged prognosticator.

GROUNDHOG DAY AT THE MOVIES: The 1993 release of the movie "Groundhog Day," starring Bill Murray, brought new attention to the occasion. The population of Punxsutawney, Pa. is about 6,000, but after the movie's release the number of people coming to town for Groundhog Day has been recorded at up to 30,000