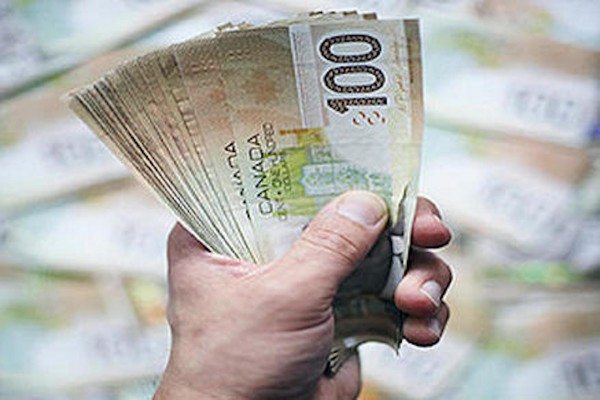 Photo: The Canadian Press
A group of activists think every Canadian should be guaranteed $20,000

A group of academics and activists is trying to drum up interest in an ambitious plan to provide every Canadian with a guaranteed minimum level of income — whether or not they have a job.

Rob Rainer, a campaign director for the Basic Income Canada Network, envisions a country where everyone is assured a minimum of $20,000 annually to make ends meet.

"For many of us, we think the goal is no one should be living in poverty," Rainer said at a conference on the issue over the weekend at McGill University.

More than 100 speakers and participants were on hand for the conference, which focused on the merits of a guaranteed minimum income that would either replace or exist alongside existing social programs.

The idea is hardly new — the Canadian and Manitoba government conducted an experiment with the issue in the 1970s — but it has enjoyed a resurgence lately.

Switzerland is expected to hold a non-binding referendum this fall on whether to guarantee every citizen an annual income of Cdn $35,900.

And in the United Sates, the idea has supporters on both sides of the political spectrum.

Proponents on the left argue it represents an opportunity for greater redistribution of wealth, while those on the right see it as a chance to cut back on bureaucracy and return control to people's lives.

The two sides disagree, however, on whether there would be accompanying tax hikes and whether other social programs would remain place.

Almaz Zelleke, a professor at New York University, said guaranteed income has rarely had this much attention in the United States since President Richard Nixon tried to introduce such a program for families in the 1960s. That effort was ultimately thwarted by Congress.

At the conference, Zelleke gave a presentation laying out how a guaranteed income could be offset by taxes and work from a practical, fiscal standpoint. But even she admitted it would be a challenge to get such a plan on the agenda in Washington, D.C.

"To be very honest, it's not on the agenda of any mainstream political party in the United States," she said in an interview, but added a recent surge in media attention has, helpfully, "generated discussion among people who understand that there are problems with the welfare state."

In Canada, the town of Dauphin, Man., was famously the subject of a government pilot project where residents were provided with a guaranteed minimum income from 1974-1978.

The goal of the program, which cost $17 million, was to find out whether providing extra money directly to residents below a certain household income level would make for effective social policy.

The community's overall health improved and hospital rates declined during the period, according to a 2010 study by Evelyn Forget, a professor at the University of Manitoba.

Former Conservative senator Hugh Segal, who officially resigned from his post this month, argued for years in favour of the idea, saying it would provide more effective services at a reduced cost.

Quebec's new minister of employment and social solidarity was also once a prominent advocate.

Francois Blais, a former political science professor, published a book in 2002 called "Ending Poverty: A Basic Income for All Canadians," though Philippe Couillard's Liberal government has made no commitments on the issue.

At the federal level, Rainer conceded it's far from the agenda of the current Conservative government, but said there's a "little bit of traction" among opposition parties.