UBC powers FORWARD to drive decades of discovery and solutions 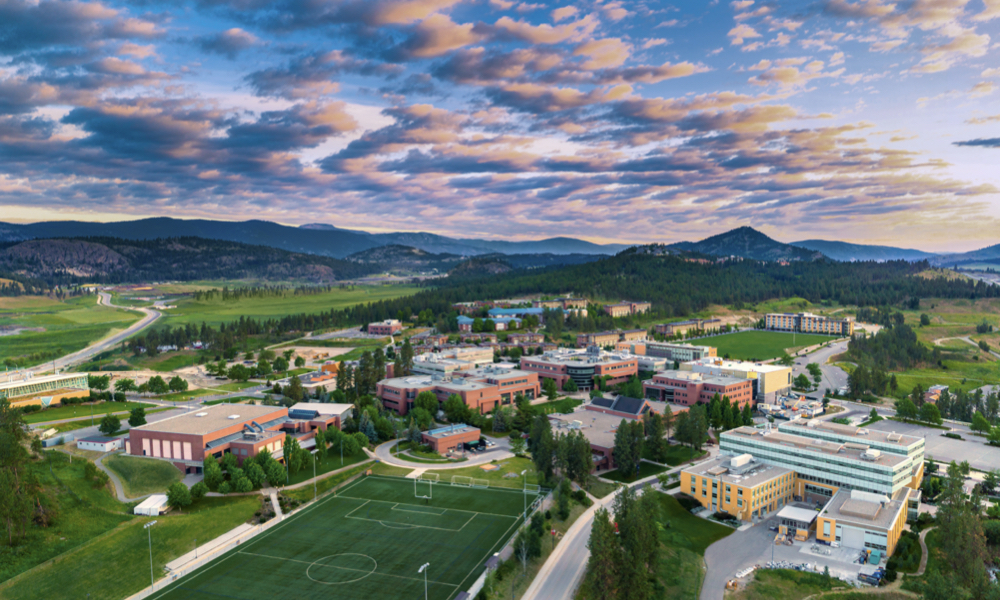 A bold commitment to help solve some of the world's most urgent problems--that's the promise and potential of FORWARD, the campaign for UBC, a $3 billion fundraising and alumni engagement initiative announced today by the University of British Columbia.

President Santa J. Ono and UBC Okanagan Principal Lesley Cormack together unveiled UBC's most ambitious campaign ever via a simulcast event held on the Vancouver and Kelowna campuses.

FORWARD, the campaign for UBC, will raise $3 billion to benefit students and researchers across both campuses, and activate the power of global alumni by doubling alumni engagement. Through giving, volunteering and engagement with UBC, donors and alumni will accelerate the university's impact in three key areas: advancing healthy lives, creating solutions for the planet, and shaping thriving societies.

"Across the globe, the call for progressive and collaborative solutions to pressing real-world problems is clearer and more urgent than ever," said UBC Board of Governors Chair Nancy McKenzie. "Universities have a powerful responsibility to help move society forward and UBC is uniquely positioned to shape our shared future. As a top-ranked research university, we already lead the way in climate action, international engagement and industry and innovation impact. We have the intellectual and physical capacity to build a healthier, more just and sustainable world. Now, working together through this campaign with our friends, donors and almost 400,000 alumni worldwide, we will forge a better future for this generation and the ones that follow."

Recognizing the affordability issues facing students at UBC and universities across the country, UBC is also highlighting its first ever fundraising initiative specifically focused on student affordability. The FORWARD for Students Affordability Initiative aims to raise $100 million with a high priority placed on responding to students who are in need.

"I am so pleased to see affordability initiatives are a focus of this bold new campaign," says Vice-President, Students, Dr. Ainsley Carry. "Students are at the heart of all that we do, and this is a very real issue facing students. The FORWARD for Students Affordability Initiative will help UBC directly support those who need assistance now."

A UBC Okanagan research initiative that the campaign will benefit is the Next-Generation Battery Research and Training Centre in Kelowna, which is poised to become a world leader in developing, integrating and recycling the next-generation lithium-ion batteries that increasingly power cell phones, laptops, electric vehicles and so much more. The global market for these batteries will reach $100 billion by the next decade. But today's batteries need a boost; they are expensive, hazardous, and have limited power and recycling options. Within the next decade, BCO researchers like Dr. Jian Liu aim to help decarbonize the North American economy by developing smaller, stronger, safer and cleaner batteries that ultimately reduce greenhouse gas emissions.

"At UBC Okanagan, we are committed to unleashing the unlimited potential of our young and entrepreneurial campus," says Dr. Cormack. "The ultimate success of this campaign will be measured in discovery rather than dollars, because we know that what happens at UBC in the next 10 years will have a decisive impact on the next 100."

At UBC Vancouver, the FORWARD campaign will help supercharge transformative biomedical innovation like Dr. Megan Levings' research into "living drugs"--a game-changer in fighting immune-based diseases. Her team is developing cell-based therapies that program human immune cells so they are like mini-computers to target and prevent chronic diseases such as Type 1 diabetes, multiple sclerosis, Parkinson's and cardiovascular disease. In the future, patients would not receive a drug but a living cell that effectively reprograms their immune response and reduces the need for future treatment. Cell therapy could also help make organ transplants safer by training the immune system to tolerate "invading" cells from another person.

These projects are just two examples among many that will benefit from this bold campaign to help find collaborative solutions to pressing global problems.

"Through this ambitious campaign, UBC will meet the future with urgency and optimism," adds UBC Board of Governors Chair Nancy McKenzie. "And with the generous support of our community friends, donors and alumni, UBC will help deliver a healthier, more resilient and sustainable tomorrow."

To learn more about FORWARD and the many projects it will advance, visit forward.ubc.ca.