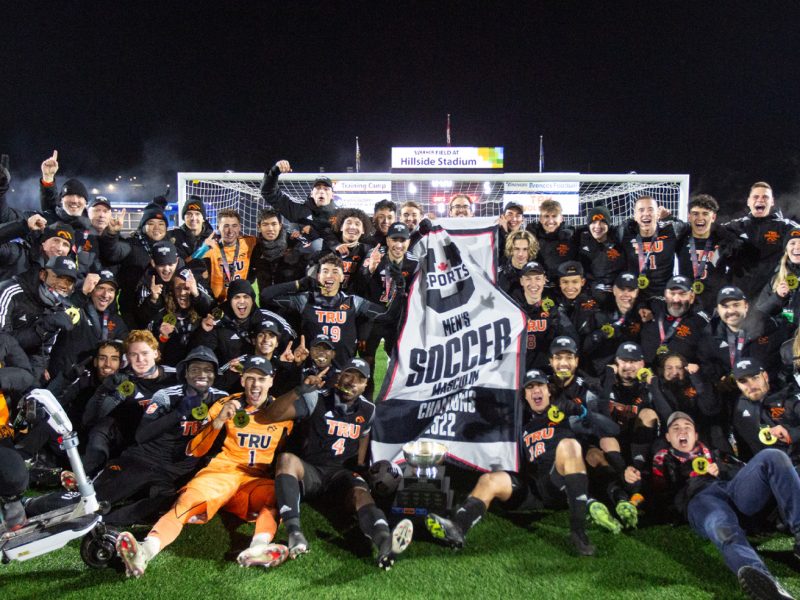 The Thompson Rivers WolfPack men’s soccer team earned its first U SPORTS National Championship in program and school history with a 2-1 victory over the UBC Thunderbirds in front of 2,400 fans at Hillside Stadium on Sunday, Nov. 13.

“I’m glad that we can be the standard bearer and bring this title home because it shows that you can get it done at a small school,” said WolfPack head coach John Antulov. “I’ve believed that since day one when I took over, that just because you’re at a small school doesn’t mean you can’t get it done.”

Kamloops’s own Alesandro Comita scored in extra time for TRU while brother Domenico knocked in the game-winning penalty. For Domenico, scoring the game-winning goal is the stuff of movies. The defender was in the stands for the WolfPack’s quarter-final and semifinal games, leading the crowd in chants over a megaphone before getting called into the lineup tonight due to injury.

“The Comita boys are unbelievable kids, they are the ultimate team guys,” said Antulov. “Domenico could have put his head down with him not playing, but he comes in, plays fantastic and hits the winning penalty kick, it just shows his character.”

A back-and-forth game throughout regulation shifted in UBC’s favour in the 69th minute when the WolfPack were reduced to ten men after a TRU player picked up his second yellow card.

“The guys never put their head down, they just battling and fought. They looked at each other and said let’s be resilient,” said Antulov. “We displayed dogged defending all the way through and for us to defend the way we did one man down against a team that scores the way they do just shows unbelievable character.”

TRU ran out the 90 minutes to send the game to extra time and then took the lead against all odds with five minutes left in the first overtime frame. Jost Hausendorf went on a great solo run and played a cross in that Alesandro Comita sent into the back of the net for the first goal of the game.

The Thunderbirds refused to go away without a fight however and the captain Daniel Kaiser knotted the game back up with just five minutes left to play. Thomas Gardner sent a free-kick into the box that Kaiser perfectly flicked into the back of the WolfPack net.

Needing a shootout victory at both the quarter-final and semifinal stages of the tournament, TRU took that high-pressure experience and used it to their advantage.

Goalkeeper Jackson Gardner made a pair of stops, five members of TRU scored from the penalty spot including Domenico Comita with the all-important winner in the seventh round of the shootout to send TRU to the historic victory.