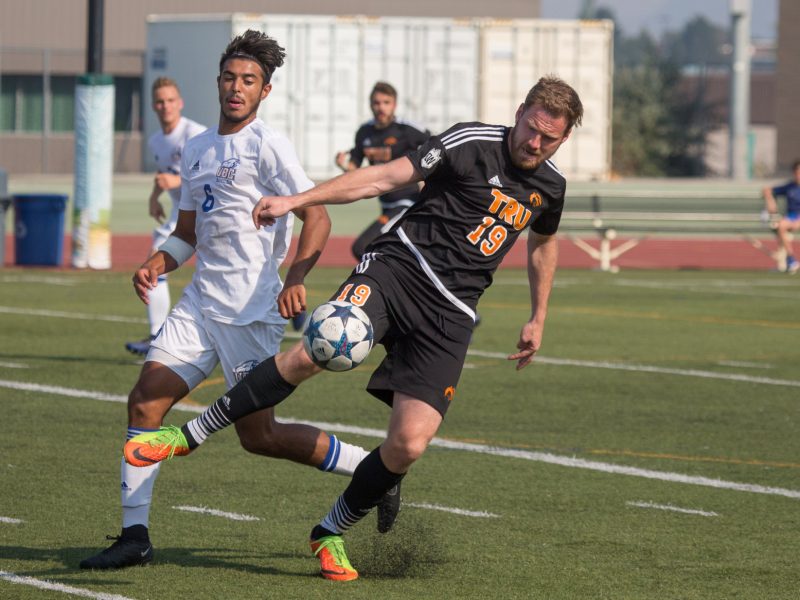 Once a member, always a member: from all-star player to all-star alum, Ryan Glanville remains a loyal part of TRU’s WolfPack.

As a fifth-year player Glanville led the ‘Pack to a bronze medal at the 2017 U SPORTS Men’s Soccer Championship in Kamloops. In front of a hometown crowd, cheered on by family and friends, Glanville describes the moment as unforgettable.

“It was a fantastic environment; having the community there and knowing they were there to support us made it a lot more meaningful,” he says, adding that having his wife and young children in attendance made it even more special.

Five years later, TRU is hosting nationals again and Glanville will be there — but this time he’ll be cheering in the stands alongside family and friends. From Nov. 10-13, the top eight Canadian university teams will vie for the championship at Hillside Stadium in Kamloops. The ‘Pack is among the contenders.

Glanville remembers how it felt going into the championships as underdogs in 2017. He says the team is in a much different position these days.

“It’s fantastic to see how strong they are and how much the program has developed,” says Glanville, crediting head coach John Antulov and TRU’s entire Athletics department with building an impressive program poised for greatness. “We know they’re going to compete at the tournament, but it’s another level of excitement when you know they have a good chance at getting a medal — even winning it is not out of the question at all.”

From Thunderbirds to WolfPack

As excitement builds for this year’s event, Glanville looked back on his own road to the WolfPack — a curvy one with a few unexpected turns.

Growing up in Williams Lake, he spent his childhood playing soccer alongside his twin brother, Sean. Following high school, Glanville registered at the University of British Columbia with academics on his mind. University soccer wasn’t on his radar, but when a buddy was recruited to attend the UBC Thunderbirds camp and asked Glanville to join him, he thought, why not?

“I cut off my summer employment by a couple of weeks, went down, made open camp, made the team and that opened me up into that next level of soccer,” he says, adding that in his rookie year the Thunderbirds won the national championships. Glanville graduated from UBC in 2006 with a Bachelor of Computer Science. He joined TRU in 2015 to pursue his Master of Business Administration and signed on with the WolfPack.

Winning a national championship was a memorable moment, but Glanville says earning the bronze as a veteran player with the WolfPack was just a little sweeter.

“It’s hard to compare the two experiences. The one we won at UBC; it was my first year of playing. I wasn’t a central figure. At TRU, I felt much more in the driver’s seat,” he says, adding that having a stadium of fans rooting for you made the experience outstanding.

Wanting to live closer to family, Glanville and his wife Chantel moved to Kamloops from the Lower Mainland prior to the arrival of their son, Oliver (Ollie). Their daughter Lola followed a few years later. Working full-time, raising a family and playing club soccer meant life was busy, but Glanville had always considered heading back to school to do his MBA. When Antulov approached him about the possibility of joining the ‘Pack, Glanville’s interest was piqued. 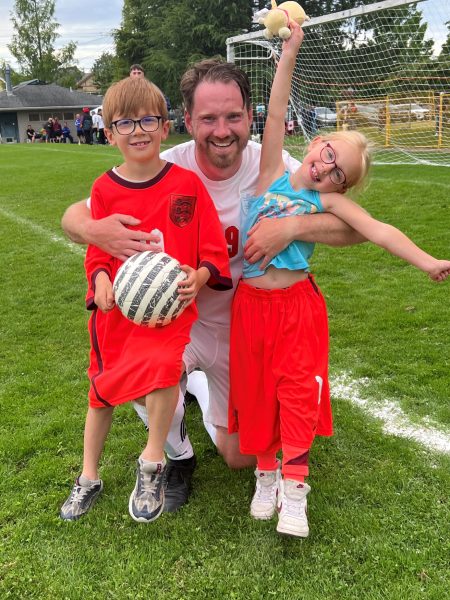 Glanville celebrates at a soccer tournament with his children, Oliver and Lola.

“It was a natural fit where I was able to continue my education, do a program I had on my radar and at the same time be part of the WolfPack community. But initially, I was a bit cautious,” he says. “Being in my 30s at the time, I wondered, could I keep up? Could I maintain a work/life balance with my family? But we made it work. My coach was great and the whole Athletics department and team were fantastic in working with me, understanding what I could contribute, where I could contribute, and it worked out.”

Glanville spent three years with the WolfPack, each year building on the one before and culminating with the bronze medal win, after which he was named the Canada West First Team All-Star. He completed his MBA in 2018, after twice winning the TRU male scholar/athlete of the year award, and works in global marketing for SAP, a multinational software company. He still plays soccer and faithfully attends a few of his favourite tournaments every year, but for the most part he now focuses on watching his children develop their passions.

“I’ve sort of taken a seat so my kids can take the reins,” he says. “I get more excited for their games than mine now.”

Ollie, nearly nine, has developed his own passion for soccer while Lola, six, divides her time between the dance floor and the soccer pitch.

Cheering on the ‘Pack

As a family, the Glanvilles enjoy cheering on the ‘Pack together. They attend as many games as possible and have their tournament passes ready. No matter the weather, they’ll be there supporting TRU and hoping the energy of the hometown crowd will help spur the men to a national championship.

Game tickets are still available for the 2022 U SPORTS Men’s Soccer Championships. Not in Kamloops? Stream the games at CBC Gem.