Alumni walk the wild side 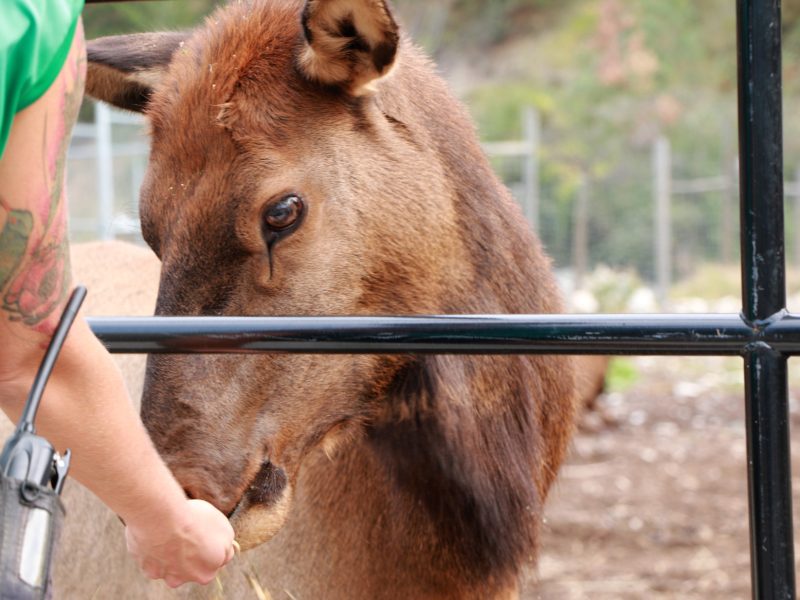 How do you become a zookeeper at BC Wildlife Park in Kamloops? In addition to the requisite love of animals, attending Thompson Rivers University could be just the ticket.

Alumni Ardice Fleck (BSc ’01), Melany Leontowich (BSc ’10) and Cecily McLean (attended TRU ’18-’19) are three of seven full-time zookeepers at the park. They know each animal they look after by name and care for them like family. More than just handling day-to-day care, they research each animal to provide the most natural living environment possible and encourage them to keep their wild ways. 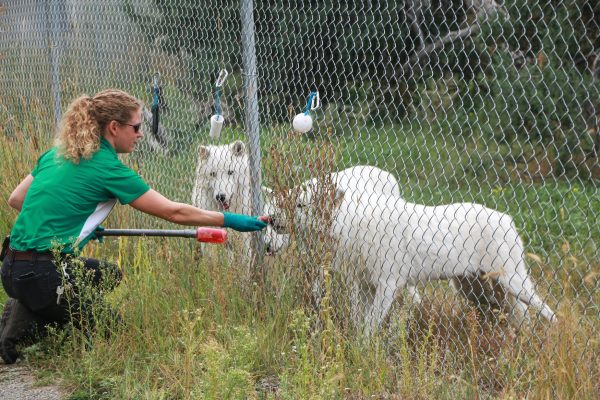 Senior zookeeper Ardice Fleck feeds the wolves at the BC Wildlife Park.

“My favourite part of being a zookeeper is of course working with the animals. I also enjoy researching and observing animal behaviour,” says Fleck, the park’s senior zookeeper.

Zookeepers work closely with the animals, learning as much as they can about each animal’s personal history as well as   the species as a whole.

Fleck has worked at the park since she was a university student at University College of the Cariboo (now TRU), first as a volunteer and then as a summer student/intern. After graduating with a Bachelor of Science in animal biology, she spent several years as education co-ordinator at the Edmonton Humane Society before returning to the BC Wildlife Park and working her way up to the senior position.

Growing up in Quesnel, Fleck loved the outdoors and knew she wanted to pursue a career in sciences. But it wasn’t until she started volunteering at the park that her path veered toward animal care. 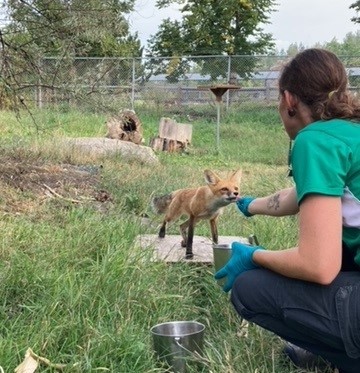 “Originally I thought I wanted to do some kind of field work,” she says. “I didn’t really know I wanted to be a zookeeper until I started volunteering here, then had a summer job and thought, ‘Wow! This could be a really great career.’”

Fleck sits on the TRU Animal Care Committee and obtained a certificate in animal ethics in preparation for the role. She has volunteered on the committee for about four years, and along with other members of the committee, reviews each research proposal involving animals at the university.

While Fleck veered her path to work with wild animals, her co-worker Leontowich — who has been at the park since 2016 — always knew it would be her career direction.

Zookeeper agrees she has the coolest job

“I grew up in Burnaby, and my father was an instructor at BCIT in the Fish, Wildlife and Recreation program, so my life was instantly immersed in the amazing natural world,” she says. “We spent our summers fishing, camping and exploring new areas of BC. So, it’s no wonder that I gravitated toward that kind of career.” 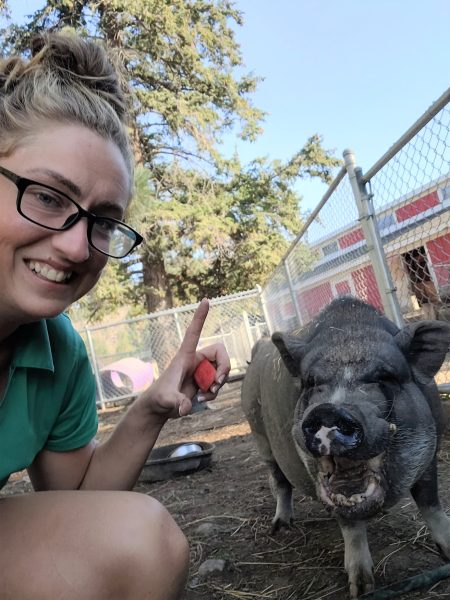 Leontowich spent a summer as a research assistant working with rattlesnakes and spadefoot toads. More recently, she’s been spending a lot of time working with Mia, a red fox who was treated at the Fawcett Family Wildlife Health Centre after being found injured on the side of the road last March. Mia is now in one of the park’s habitat areas, where she is slowly gaining confidence and making friends with Raven, the resident marble fox.

“There aren’t very many people who get to do what we do and it’s so rewarding to build relationships with wild animals,” says Leontowich. “You never get tired of hearing, ‘you have the coolest job,’ because we really do.”

Training animals to assist in own care

The zookeepers do husbandry training with the animals in their care, teaching them behaviours that allow them to participate voluntarily in their own health care. When one of the wolves, Sijja, had to be sedated for an exam recently, Fleck described how they directed her to the fence where a sedative was administered with little to no stress.

“We’ve got an area in the back where they come up to the fence and we can use a jab pole. We inject them in the hip through the fence and then they’re sedated. They come over for treats and we practice using the pole without a syringe on it and then when we actually sedate them, there is a syringe on it and we poke them,” she says. “By doing it that way it was not stressful for her at all.”

The bighorn sheep have also had training that reduces their stress and makes caregiving a little easier. Recently, McLean’s training made rabies vaccinations stress free for the bighorn sheep. 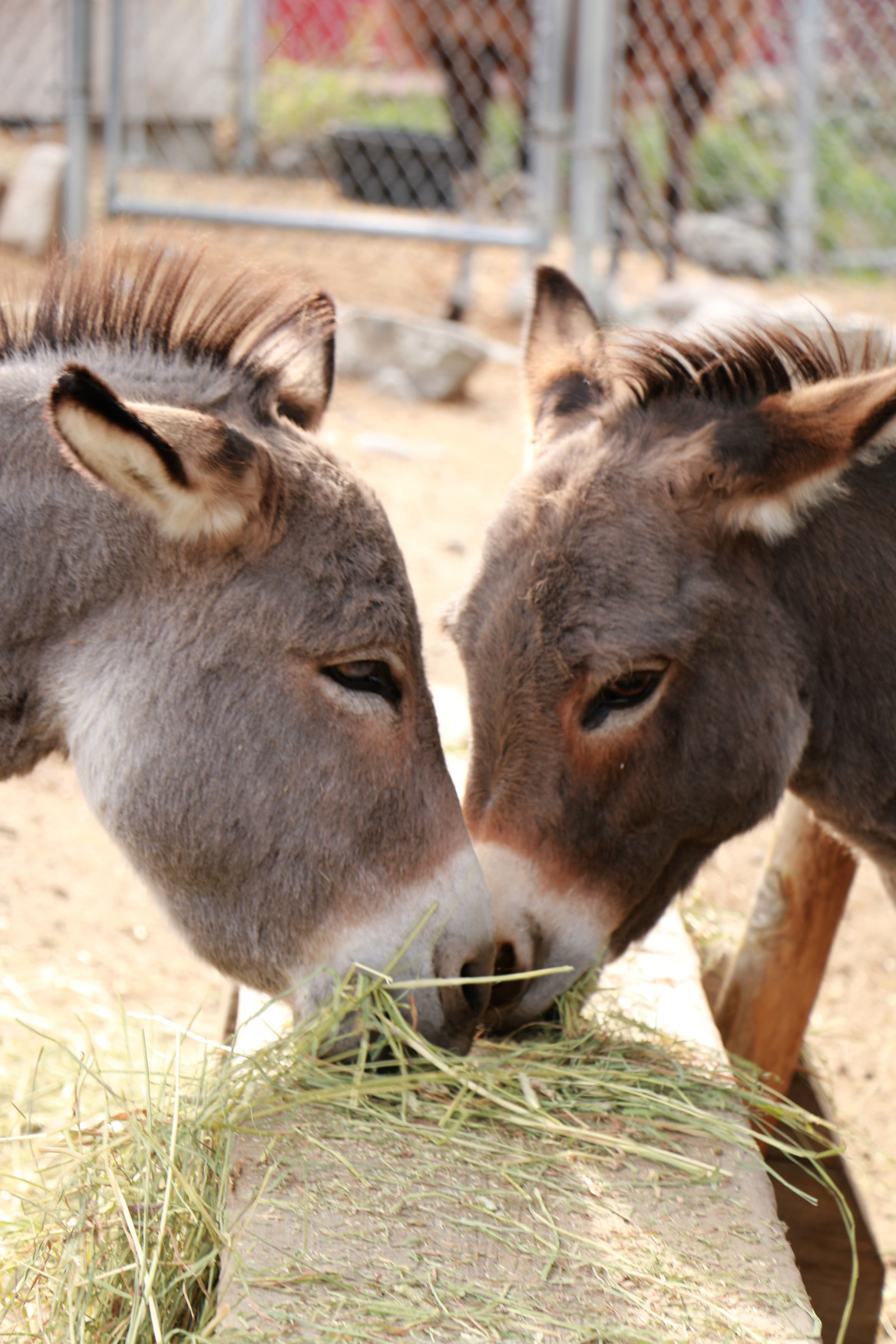 “They had zero stress. The training that I’ve accomplished with them is unreal,” she says. “If you’re motivated and have the passion and patience, you can train anything.”

The passion McLean has for the animals at the park is obvious. As she moves between the elk, the swan pond and the farm animals, giving personal care and attention to each animal along the way, her wide grin never stops.

“I’m ecstatic to be here. It’s soul changing,” she says, adding that after a decade of working in retail, she followed her heart and went back to school. “This is a lot of work, but oh man, it makes me happy.”

With her focus set on working at the wildlife park, McLean began volunteering to get her foot in the door while taking upgrade courses at TRU. When a position opened, she jumped at the chance to follow her passion and put her studies on hold. She has immersed herself in all aspects of animal care and training at the park and hopes to continue her education when time allows.

When asked what advice they have for people with similar career aspirations, each of the zookeepers had a similar response: volunteer, volunteer, volunteer. In a competitive industry, they all agree that education is important but experience also plays a huge part.