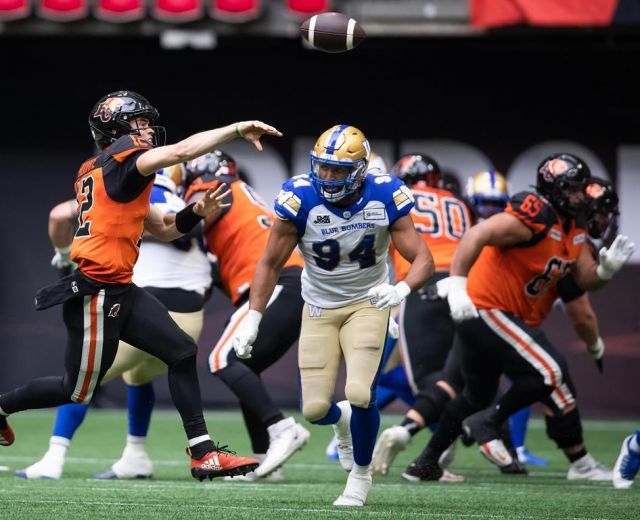 There's a big obstacle standing in the way of Nathan Rourke leading the B.C. Lions to their first Grey Cup appearance since 2011.

Rourke and Co. are at IG Field on Sunday to face Winnipeg in the West Division final. To gain a shot at a first CFL title in 11 years, the Lions must dispatch a Blue Bombers team that's won the last two Grey Cups and posted a league-best 15-3 record this season.

Also on Sunday, the Toronto Argonauts host the Montreal Alouettes in the East Division final. The conference champions will meet in the Grey Cup game Nov. 20 at Regina's Mosaic Stadium.

The only team Winnipeg didn't capture the season series against this season was Montreal (1-1). The Bombers defeated B.C. twice in three regular-season meetings.

That included a 24-9 decision in Vancouver on Oct. 28, a game that had no bearing on the West Division standings. But it did mark Rourke's return to the Lions after suffering a foot injury in a 28-10 victory over Saskatchewan on Aug. 19 that required surgery.

The 24-year-old Victoria native, who'd taken the CFL by storm before his injury, started against Winnipeg and completed seven-of-11 passes fore 68 yards before giving way to veteran Vernon Adams Jr. Rourke was 22-of-30 passing for 321 yards with two touchdowns in leading B.C. past Calgary 30-16 in the West semifinal Sunday before a B.C. Place Stadium gathering of 30,114.

But Rourke wasn't the only Lion who performed at a high level.

Keon Hatcher had eight catches for 162 yards and a TD while James Butler ran for 95 yards on 20 carries. The Lions did allow four sacks but the offence had the ball for over 33 minutes in the contest.

The trio of starter Jake Maier, veteran Bo Levi Mitchell and Tommy Stevens combined to complete 20-of-34 passes for 285 yards with no TDs.

But Winnipeg will counter with veteran Zach Collaros, the CFL's outstanding player last season who's also in the running for this year's honour. The 34-year-old was first overall in TD passes (37) and second in yards (career-best 4,183) while sporting an impressive 70 per cent completion percentage.

Not to mention, Collaros won 15-of-17 starts this season and is unbeaten in the postseason with Winnipeg (5-0, including consecutive Grey Cup victories).

Winnipeg was also a stellar 10-1 within the West Division this season and league-best 8-1 at home.

With IG Field being an outdoor facility, weather could be a factor. Sunday's forecast calls for a temperature of around -10C, which will feel more like -15C with winds between 12 and 18 kilometres an hour.

That could put the onus on the ground game, something both teams did well this season. Bomber Brady Oliveira (1,001 yards, 5.0-yard average, four TDs) was the only player other than Carey to crack the 1,000-yard rushing plateau in 2022.

While both defences are solid, Winnipeg led the CFL in fewest offensive points allowed (19.2 per game), offensive TDs (27) and offensive yards (327.3). The Bombers also gave up a league-low eight rushing touchdowns.

Winnipeg's Janarion Grant had two punt and on kickoff return TDs this season, which could be a factor in a close game.

At Toronto, the Argos host the conference final at BMO Field for a second straight season, but face Montreal for the right to advance to the Grey Cup for the first time since '12.

The Double Blue won the season series 2-1 and have ridden a ball-hawking defence for much of the season. The unit forced 48 turnovers and scored seven TDs (including five via interception).

The Argos also had a CFL-best 29 interceptions, with cornerback Jamal Peters registering a league-high six (one returned for TD). Canadian running back Andrew Harris returns after requiring surgery for a torn pectoral muscle suffered against Hamilton in August.

Montreal's defence had six sacks in Sunday's 28-17 East semifinal home win over the Ticats. Linebacker Tyrice Beverette had two sacks and two forced fumbles. The Argos finished atop the East thanks to a 7-3 conference record. Montreal was 5-5 but 5-4 on the road.

This report by The Canadian Press was first published Nov. 9, 2022.