Sativa hot in the summer 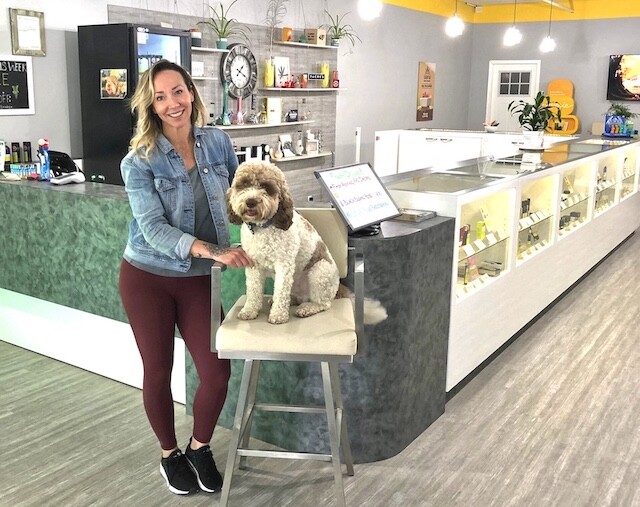 Photo: Contributed
Tienne Bayrack, pictured here with her dog Arnold, is owner of Seed to Soul in Armstrong.

Sativa in the summer, Indica in the winter.

While consumer taste for type of flower varies by season, she says. The dominant format remains consistent.

“We sell a lot of pre-rolls,” says Bayrack. “Those are probably the most popular at any given time.”

The popularity of pre-rolls is something that has surprised a lot of cannabis producers and retailers in Canada’s legal weed marketplace.

Bayrack has been in the cannabis game for 15 years. At one point she had a licensed medical grow facility, which she sold to a major licensed producer before shifting into retail.

She says she wanted to support legacy growers and she makes a point of sourcing B.C. products.

Seed to Soul has developed a niche in Armstrong helping all demographics.

“The Friday crowd varies from the Monday crowd,” she says. “We’ve got a lot of people who smoked back in the day and are reintroducing themselves to it.”

Meanwhile at Seed to Stone (a similarly named but different store), which has several locations in the Lower Mainland, there’s been a consumer interest toward concentrates.

Jeremy Selby, who’s in charge of purchasing for Seed and Stone’s cannabis stores, says expanded selection and competitive pricing has contributed to that trend. Some of the top concentrate brands are Kolab and Earthwolf Farms.

At Spiritleaf in West Kelowna, owner Michael Adams says there’s a large base of CBD customers.

Gummies are in top spot for edibles, and he says they’re noticing the beverage category gaining popularity.

“Now that the industry has matured, we are seeing customers gravitate towards larger 28-gram dried flower formats,” he adds.

PAX pods and 510-thread vape carts, which heat cannabis concentrate into a vapour to be inhaled, have been developed a foothold.

“With how convenient vapour products are, they have definitely become a store favourite. No lighter, no ash, no smell, no problem.”

David Wylie is publisher of the oz. magazine. For more cannabis trends, go to theounce.ca.