Cannabis mentions in federal budget a sign of friendlier relations 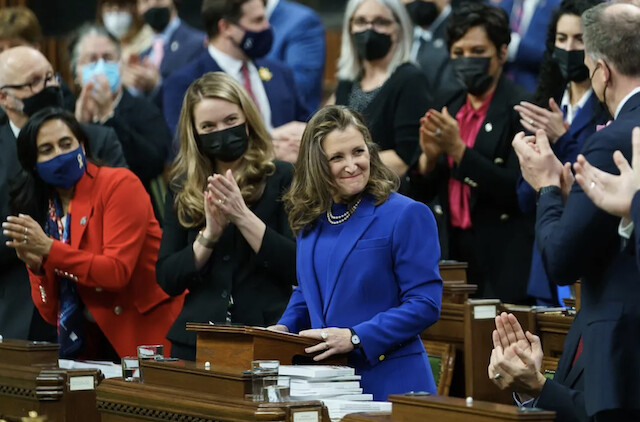 It may not seem like a lot, but cannabis was mentioned a total of nine times in the 2022 federal budget document. That’s eight more times than in 2021.

The proposed budget, unveiled Thursday in Ottawa by the Liberal government, hints toward a more open and productive relationship with the cannabis industry.

In the nearly four years since legalization in 2018, the Liberals have practically worn oven mitts while handling the hot potato of pot policy. Cannabis has been seen only through the lenses of public health and crime.

This latest budget puts the growing weed industry as an important economic consideration, nationally and internationally.

Called: “A Plan to Grow Our Economy and Make Life More Affordable,” the budget includes a section titled “Engaging the Cannabis Sector.”

“As a relatively new sector of the (Canadian) economy, it is important that the federal government and all stakeholders have a clear understanding of the challenges and opportunities that are facing Canada’s legal cannabis sector,” says the budget document.

“Budget 2022 proposes launching a new cannabis strategy table that will support an ongoing dialogue with businesses and stakeholders in the cannabis sector.”

The cannabis strategy table would be led by the Department of Innovation, Science and Economic Development.

That’s a notable departure from Health Canada handling the file and overseeing the creation and interpretation of the rules that regulate everything—including licensing, growing, packaging, medical and marketing.

The Department of Innovation, Science and Economic Development’s overall mandate is to

The federal strategy table will create opportunities for the government to hear from industry leaders and identify ways to work together to grow the legal cannabis sector in Canada, says the budget document.

This new formalized engagement would be in addition to proposed changes to the cannabis excise duty framework that were detailed in the Tax Supplementary Information.

Cannabis also appears further on in the budget in relation to a previous commitment on jurisdiction for Indigenous governments.

“As committed in Budget 2021, the government will work with Indigenous groups and organizations on a potential fuel, alcohol, cannabis, and tobacco (FACT) sales tax framework as an additional option for Indigenous governments to exercise tax jurisdiction,” says the budget document.

“The government has a continued interest in facilitating taxation arrangements between interested provinces or territories and Indigenous governments.”

So what does this actually mean?

The nine mentions of the word “cannabis” in the 300-plus-page Canadian budget document signal the government acknowledges pot as a growing global opportunity that requires a federal strategy. (In the 2021 budget document, it was mentioned only once, in relation to an Indigenous tax option.)

The new cannabis strategy table is a long-overdue invitation (to allow for) for the pot industry to sit at the table.

One of the most talked about social justice issues in cannabis has been the criminal records that have dogged people over small cannabis crimes.

The newly minted Liberal-NDP deal carries potential for further changes to cannabis regulations—notably on the issue of expungements.

The NDP championed expungements over pardons during the last election campaign and may use its new position to push that forward.

David Wylie is publishing editor of the oz., a cannabis magazine based in the Okanagan. The spring 2022 edition is now available. Email [email protected].