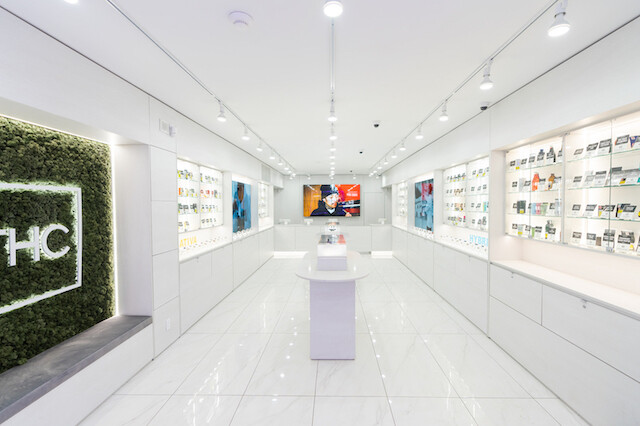 THC Canada started in the legacy market and has been on Vancouver’s Main Street since 2016. Now post-legalization, it’s one of the best-known licensed stores in the country.

A lot of customers from the legacy days continue to shop in the store, he says—though there were some hiccups in the early years.

“When rec-legalization first took place, a lot of those customers were either coming in and being disappointed or not shopping with us for the first year or two,” he says.

“Now that the product quality has started to catch up and a lot of those former legacy operators are really starting to transition over to the legal market, we’re bringing a lot of those old-school customers back.”

THC is focused on carrying a wide-selection of BC grown craft products and high-quality concentrates.

Growers that stand out include smaller operations that have come to market through collectives, such as Joint Venture (Pineapple Buds and Black Kettle Farms) and Pistol and Paris (JBuds). “People are starting to know to look for that and ask for that,” he says.

Growers that stand out include smaller operations that have come to market through collectives or brands, such as Joint Venture (Pineapple Buds and Black Kettle Farms) and Pistol and Paris (JBuds). “People are starting to know to look for that and ask for that,” he says.

“When it comes to highest of quality, it’s mostly those guys,” he says. “That’s off the top of my head. I’m sure there’s a few that I left out that I’ll kick myself for later.”

He says some products have maintained a “cult-like following” because they stood out in the early days of legalization—producers such as Whistler Cannabis, Zenabis, and San Rafael ’71.

“Some of these brands that people ask for is just because they started shopping in the legal market in 2018 or 2019 and whatever they bought then if they found something that was actually good they just wanted to stick with it,” he says.

“They kept their following over time and continue to be requested.”

“Coming from the legacy market, that was one of our specialties,” he says.

Now, they spend time talking to licensed producers about what’s going to be the best concentrate drops so they can load up. Bambury mentioned BIG – Kush Live Rosin and Kolab Project’s Live Rosin Jam as notables.

“We want to make sure we have a crazy selection of that and also buy enough of it so that we have stock of it even when other stores run out,” he says.

Aside from product selection, Bambury says THC is great at storytelling and produce a lot of content. They just released a YouTube series called THC TV that’s a behind the scenes look, including footage that dates back years.