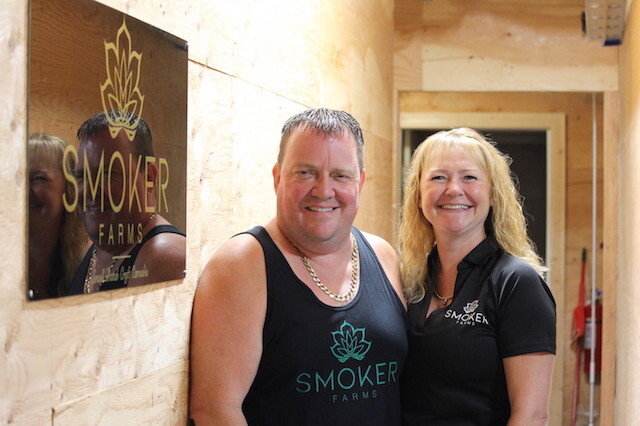 Jeff and Sheri Aubin are the passionate couple behind the mom-and-pop legal cannabis grower Smoker Farms.

In fact, you may have smoked a little something, something grown by Jeff before cannabis became legal. He’s been at it for 25 years and has brought his legacy experience to the legal market.

“Cannabis is my life,” he says. “All I’ve ever wanted to do is grow weed.”

Located in Beaverdell, B.C., Smoker Farms is a micro-cannabis producer able to grow about 500 pounds a year. The operation is tucked into in the West Kootenay woods off Highway 33 on a lot where the Aubins plan to build a home. They sold their place in Kelowna and uprooted their life in November 2020 to follow their cannabis dream.

“I was in the black market, hiding behind a medical licence like everybody,” says Jeff. “Obviously I was hoping one day it would lead to this, but never thought it would ever happen in our lives. When the legalization of cannabis came around we had to make quick decisions on what are we going to do because I was done with the black market; it’s a saturated market. I was sick of being afraid that everything I’d worked for so long would be taken away from us by illegalities.”

Smoker Farms’ first small-batch release was The Ultimate, which smells and smokes like the good stuff from back in the day. The Indica-dominant hybrid has 21.8% THC and 2.89% terpenes, mainly caryophyllene, limonene, and myrcene. It’s packaged and distributed through Joint Venture Craft Cannabis.

When I visited this past summer, their first batch of highly anticipated Master Kush Ultra was just harvested and hanging to dry, and a second batch was already flowering. Now, it’s hit the BC cannabis market—clocking in at over 26% THC, it’s getting lots of positive reviews.

Jeff says the strain is the couple’s all-time favourite and what he’s growing is truly unique to the legal market.

“Nobody has this Master Kush Ultra strain that I have,” says Jeff, adding they’re seeds from 15 years ago that he’s spent years perfecting.

“It’s such a unique Master Kush Ultra strain. It’s got such an addictive flavour. It hits like a hammer too.”

The Aubins got their micro-cultivation licence on June 26, 2020, after successfully fulfilling Health Canada’s arduous application process. They did a lot of the work themselves, but had guidance from Michael Ciardullo at dicentra Cannabis Consulting out of Toronto.

“My blood, sweat and tears are in every nail and every screw in this place,” says Jeff.

They’ve kept the facility relatively simple and had friends come help with the construction to keep costs down. Walls in the corridor are exposed plywood—a much different look than many of the larger scale producers.

Inside the grow rooms, however, Smoker Farms has tapped into modern cannabis-growing techniques. Instead of soil, they use much cleaner rock-wool blocks. They also employ a Dosatron system that allows Jeff to feed the plants exact amounts of food at specific times. He can control much of the operation from his cellphone.

They received help with their setup and techniques from master grower Daniel Saez, who helped them with genetics and guidance on growing.

“It entered a whole new world for us of growing with science,” says Jeff. “We can grow like the big boys.” As part of their process, they remove almost all the leaves and lower portions of the plants, so that only the top colas remain.

“Our concept here is that we want just to grow the flowers and we want all upper canopy flowers,” says Jeff. “Everything in testing always tests higher at the top of the plant.”

Their passion is evident in the care they take with the plants, from playing rock music in the grow rooms to ensuring the preservation of the trichomes as much as possible.

“Trichomes are everything,” he says. “We spend countless hours in our room sitting and manicuring, making sure all the leaves are off, making sure there are no stems there. We touch every bit of cannabis,” says Jeff.

“Only with gloves though,” adds Sheri with a laugh.

The couple met 27 years ago at Splash’s Nite Club, a Kelowna bar. They’ve been inseparable since—even through the immense challenges of building a cannabis facility and getting licensed.

“Most of our friends think we’re out of our mind a little bit for doing this,” says Jeff.

“Obviously this is a huge test for anyone. I know any business will test your strength and your bond with each other. This one it seems extra; it just seems around every corner there’s something new to deal with.”

“There’s been a lot of tears,” adds Sheri. “It’s not an easy journey. We were due for a complete life change.”

Jeff says there are big things yet to come from Smoker Farms.

“I have some of the best seeds on the planet in my vault. I’ve got some 30% seeds, I’ve got some crazy seeds, man. Just holding back a little bit. Don’t want to release them all just yet,” says Jeff.

“I always wanted to produce some of the best cannabis on the planet. That’s what I strive for every day—to produce a flower that when somebody opens that little tin, they look at it and go, ‘Holy! It’s a work of art and I don’t even want to smoke it it’s so beautiful.’”