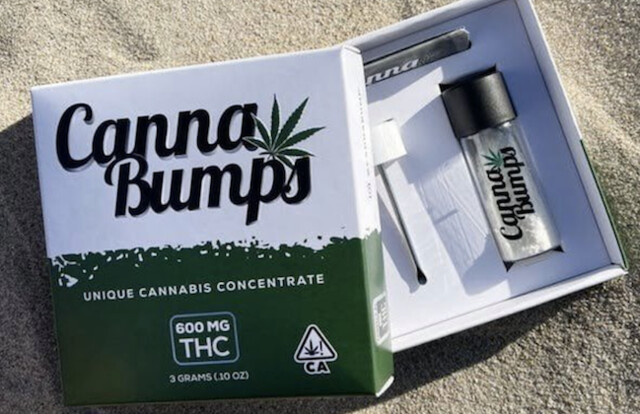 Would you snort cannabis?

That’s what something called Canna Bumps proposes. The name Canna Bumps is a play on taking a small sniff of cocaine — a bump.

The product has sparked a heated conversation around where to draw the line, so to speak, when it comes to cannabis delivery methods.

“Have some fun with your cannabis with our unique cannabis concentrate. Canna Bumps are just what they sound like – cannabis concentrate designed to be consumed through the nose, ingested directly or added to your favourite food,” says the product description.

Canna Bumps was listed by licensed California cannabis company THC Living early this month, and appeared on the company’s site, Leafly and Weedmaps. It’s since been removed after an uproar.

The product description from Canna Bumps says it’s designed to allow THC molecules to transfer directly into blood circulation through the nasal cavity, bypassing the liver and digestive system for immediate effect.

The three-gram container is said to contain 600 mg of THC, and each 10 mg bump provides 2 mg of THC. Apparently, the kit comes with a little coke spoon.

Initially, it wasn’t clear whether the product was real or a joke.

However, Leafly provided an update after receiving a statement from a law firm representing THC Living. It says a few months ago, THC Living was approached by a third party that wanted to use the company’s proprietary formulations to create Canna Bumps.

“As soon as our client learned more about the product, it took the temperature of its customers and those in the industry to gauge how they felt about Canna Bumps. Because of its own concerns, those expressed by consumers, and the misgivings of those in the industry, our client made the decision to terminate any licence granted to any third party that would use its proprietary information to produce or market a product like Canna Bumps,” says the statement.

Still, Leafly points out that THC Living didn’t merely license its technology; rather Canna Bumps was marketed as a product in the THC Living consumer line.

Canna Bumps has made one thing abundantly clear — most people don’t want the product to even exist. Online, the cannabis community has reacted mostly with mockery and derision.

There are so many different ways to partake in the cannabis plant, it boggles my mind why someone would want to take it up the nose.

David Wylie is publisher of the oz. Reach him at [email protected]. Keep your eye out for the latest edition of the magazine, which is about to drop.