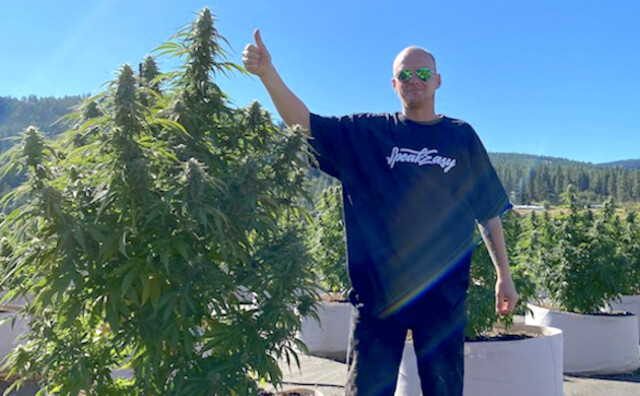 Photo: Speakeasy Cannabis
A Speakeasy worker stands next to one of the massive plants on the cannabis plantation's 60 acres.?

This past year was a busy one in the cannabis sector.

From all the news, I narrowed it down to the top five stories in the world of weed in 2020.

If you’d rather watch me discuss these stories on The Cannabis 101 Podcast with Dean Millard, you can see us on YouTube. https://youtu.be/Mz0JruNG0Wg

There is now a veritable cornucopia of cannabis products from which to choose, and the selection will grow in numbers and diversity.

Customers are gravitating toward Cannabis 2.0 products.

The Canadian Cannabis Survey 2020 from Statistics Canada found that edibles have become very popular. In fact, they are the second most used form of cannabis. Flower remains king, with 79% of men and 67% of women partaking that way.

As for edibles, more than half of women who used cannabis reported using edibles, compared to 47% of men.

Beverages have not yet caught on. They are the least used cannabis products for both men and women (7% and 5%, respectively).

With the COVID-19 pandemic, people who have been feeling a little uncomfortable about smoking and vaping, as a respiratory illness spreads, have turned to alternatives.

This was a bad year to work for a licensed cannabis producer.

Hundreds of people lost their jobs this year at major LPs, as cannabis growers bled money and tried to limit the damage by shutting down production facilities and shedding employees.

It was often done under the awful phrase, ‘right-sizing.’

Aurora laid off 200 people in December at its flagship Sky facility in Edmonton, where capacity will be cut to 25%. They’ve also indefinitely paused operations at their Medicine Hat operation.

In March, Canopy had unveiled what it called a “production optimization plan.”

That blueprint included the closure of two greenhouse facilities in Aldergrove and Delta, B.C., sending about 500 into unemployment. In May, Canopy further scaled back, laying off another 200 people in Canada, the U.S. and the UK.

The year wasn’t all doom and gloom. There were also major deals setting the scene for the future growth of corporate cannabis.

Tilray and Aphria announced in December plans to merge, which would create a new biggest cannabis company in the world. The deal is valued at $4 billion.

Aphria CEO Irwin Simon will preside while his counterpart Brendan Kennedy will become a board member.

The deal is anticipated to be sealed by the second quarter of 2021. The newly formed company will keep the Tilray name. The combined entity will now command 17% of market share in Canada, says Yahoo Finance.

(Prediction: Look for more of these deals in the near future, as cannabis companies consolidate to compete in an increasingly large global cannabis market.)

Speakeasy Cannabis harvested 60 acres of plants this fall at its operation in Rock Creek, located at the end of Highway 33.

Speakeasy founder Marc Geen, whose father was a big deal in the early days of Sun-Rype, said the previous record was 40 acres in Colorado.

He said the weather this year was perfect for growing weed — plenty of blue sky and hot weather, with no rain for 65 days.

“What I had imagined for years finally came true and was more spectacular and amazing than I had pictured,” said Geen.

“It is difficult, if not impossible to describe what standing in the middle of 60 acres of blooming, fragrant cannabis plants is actually like. Everywhere you look, big healthy crystal covered buds, the fruity pungent aroma hanging thick in the air, the satisfaction of seeing the results of so much work, I wish you all could have walked through.”

The harvest yielded more than 72,000 kilograms of dried, fresh frozen and biomass, which will be packaged as flower and turned into extracts at Speakeasy’s production facility.

The world is going to pot

Cannabis is growing around the world, and this year it gained even more momentum.

Israel laid out a roadmap to legalize recreational cannabis within a year.

Mexico is working on its own plan to legalize recreational cannabis; though it’s been delayed a few times.

That makes 13 states, two territories and the District of Columbia, that allow (or will allow) legal adult recreational use of cannabis.

With President-elect Joe Biden slated to move into the White House in Jan. 20, federal changes may be on the horizon.

Meanwhile, those familiar with the global market say Europe is sitting where Canada was about five years ago, and expect big changes overseas. That’s also clear from the investment that many major cannabis companies in Canada are making in the EU.

We are watching Australia closely, as they are a world leader in cannabis research and have a legalized medical marijuana. The Australian Capital Territory is the only place on the continent that has legalized recreational cannabis.

In less than two years, cannabis went from illegal to indispensable.

As COVID-19 forced lockdowns and closures in Canada, provinces across the country listed cannabis retail and production among essential businesses.

The federal government, meanwhile, deemed medical cannabis production essential — a designation that helped provinces and municipalities in their own decision-making about what was essential vs. non-essential business.

As the pandemic wore on, numerous provinces also eased tight restrictions. In B.C., for example, retailers were allowed to sell recreational cannabis through their websites, though customers still had to come to the store to pick it up.

Similarly, jurisdictions all over legal states in the U.S. also declared cannabis essential.

Companies in the cannabis sector proved to be essential in more ways than one.

Health Canada asked cannabis laboratories to shift into providing testing services needed in the fight against the spread of the coronavirus, including testing sanitizers and disinfectants.

With front-line health care workers facing a critical shortage of personal protective gear, such as masks and gloves, some cannabis producers have offered their own stock.

Agree? Disagree? Email the author at [email protected]. You can also subscribe to the oz. email newsletter, which comes out on Fridays.