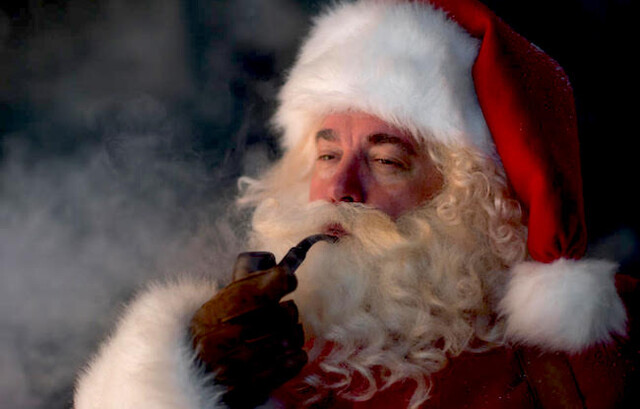 'Twas the night before Christmas, when all through the house

Not a creature was stirring, except me and my spouse;

The rollies were left near the lighter with care,

In hopes that we would soon roll, lick and flare;

The children were tucked tightly into their beds;

It was time to get blitzed right out of our heads;

Had just settled down for Netflix and snacks,

When on top of the roof we heard such a patter,

I took a hit from my bong before checking what was the matter.

Shuffled over to the door, undid the lock,

Turned the handle and pulled; ugh, this weather sucks.

Freezing rain fell; it was nasty outside.

How could anyone walk out there — let alone drive?

When what to my glassy eyes did appear,

A Volkswagen van into my driveway had steered.

The driver had a red tuque and coal-black moustache,

His passenger a bandana, and… hugging their stash?

They opened the doors and with a mighty great whoosh,

Smoke billowed out and I swore I smelled Kush.

On, JEAN GUY! on, CHOCOLOPE! on, GRAPE APE and PURPLE URKLE!

To the steps of the porch! to the front door!

As leaves that grow flower all sticky with resin,

Then smoked, vaped or eaten will take you to heaven;

I know that helping fellow stoners in need

Is the most ancient of all of our cannabis creeds.

I invited them in, offered them some water

We had a spare room, really it was no bother.

The two seemed so retro, straight from the ‘70s

So darn familiar, I just couldn’t pinpoint their identities.

As I scratched my head and silently ruminated,

The man with the bandana anxiously stated:

“Already did man,” said the other in a huff.

Bandana whistled high and let out a “Hoo hoo hoo…”

That’s when it happened, magic on Christmas night

From the chimney he sprang, giving us a fright.

He was dressed all in fur, from his head to his foot,

His clothes were all tarnished with ashes and soot;

A bag full of cannabis flung on his back,

He looked like a peddler with a fat chronic sack.

His eyes — how they twinkled! his dimples, how merry!

His droll little mouth was drawn up like a bow,

And the beard on his chin was as white as the snow;

The stump of a pipe he held tight in his teeth,

And the smoke, it encircled his head like a wreath;

He had a broad face and a little round belly

That shook when he laughed, like a bowl full of jelly.

He was chubby and plump, a right jolly old elf,

And I laughed when I saw him, in spite of myself;

A wink of his eye and a twist of his head

Soon gave me to know I had nothing to dread;

He spoke not a word, but went straight to his work,

And filled the (19+) stockings; then turned with a jerk,

And laying his finger aside of his nose,

And giving a nod, up the chimney he rose;

He sprang to his sleigh, to his reindeer gave a whistle,

And away they all flew like the down of a thistle.

But I heard him exclaim, ere he drove out of sight—

“Happy Christmas to all, and to all a good night!”

…When I finally exhaled the massive hit from my bong,

I turned to my spouse: "Did you see Cheech and Chong?”

(With gratitude to Clement Clarke Moore for his unparalleled description of Santa.)

Email the author at [email protected]. Join hundreds of other Okanagan cannabis insiders by signing up at okanaganz.com.