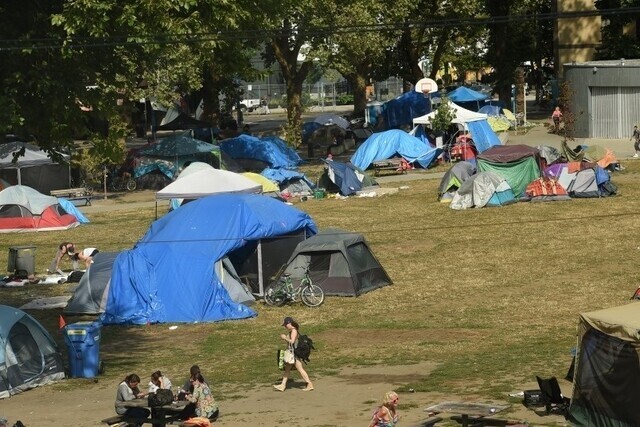 Dozens of young people who lived on the streets of Vancouver were canvassed about their cannabis use in a new study.

The consensus among them is that in many ways weed is beneficial to their challenging lives.

Researchers interviewed 56 youth between 2017 and 2019 about their cannabis use. While most participants said they derived euphoric pleasure from weed, researchers noted no one in the study was using it solely for recreational purposes.

“Weed is very medicinal—it’s the best medication there is,” said Blake, 21. “It cures my hyperactivity. I also have scoliosis, and my back pain stops, too, when I use it.”

Blake isn’t alone. Many other participants had similar responses, including using cannabis to ditch alcohol and heroin.

Using for good, not evil

The study, titled “‘Something that actually works’: Cannabis use among young people in the context of street entrenchment,” was published this week on the science journal, PLoS ONE.
It was released amidst news that overdose deaths in Kelowna are running far ahead of last year’s pace.

There are between 35,000 and 45,000 young people who are living without a stable or safe residence in Canada. In Vancouver, a recent homeless count revealed that there are nearly 700 youth aged 13 to 24 living on the streets of Greater Vancouver.

Here are some of the other responses:

“There was a period of time there when I was sober for about—almost five months. I still had cravings (for alcohol) but it wasn’t so bad because I was using pot to wean myself off of it.… Eventually I was able to maintain a job, I was able to move back with my dad. It’s much better, smoking pot, eating food, going to bed.”

“I’ve been sleeping on the beach for three months. I smoke a lot of weed. And then I don’t have the sadness. My environment is still sad, but smoking weed helps me a lot. That’s very, like, therapeutic for me. And it just lets me, like, keep going.”

“I haven’t considered going to residential treatment because I can’t use weed there, you know? Because, like, that’s a medicine for me. It’s not a drug. So, like, that’s been a huge barrier in my getting clean and sober. It’s a challenge for those of us who use [weed] medically.”

The group of researchers include M-J Milloy, the Canopy Growth professor of cannabis science at the University of British Columbia.

Check out some of the oz.'s archive of newsletters.