Can't even get a six-pack 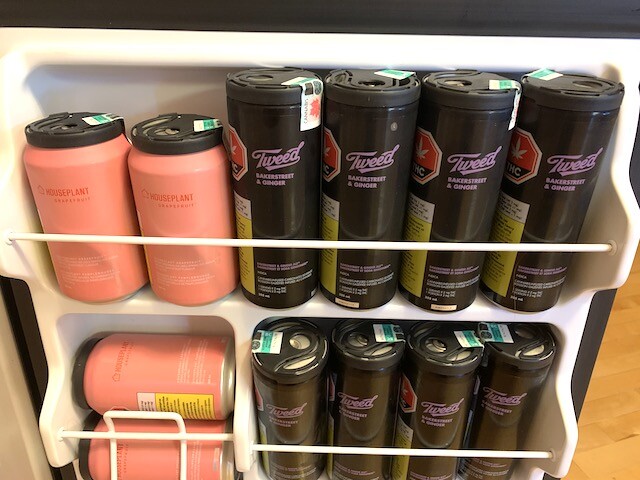 My mini-fridge is stocked with cannabis drinks.

Getting them in the first place, however, was difficult. The main challenge you’ll come across while trying to stock up is cannabis equivalencies – that’s the amount of cannabis said to be contained in Cannabis 2.0 products.

Houseplant’s Grapefruit Sparkling Water, for instance, has the equivalency of 5.1 grams of cannabis per can — though they only contain 2.5 mg of THC per drink.

Since The Cannabis Act prohibits purchases over 30 grams of cannabis (or the equivalent thereof), you’ll only be able to buy up to five drinks per order. You can’t even get a six pack.

While stores could sell you more by ringing through multiple orders, you’re breaking the law by having more than 30 grams of cannabis with you at a time. Even more cumbersome is that if you’re ordering the drinks online, through the BC Cannabis Store for instance, you’ll have a $6-shipping fee tacked on to every order.

I’m not the only person to grumble about it.

One local cannabis store owner says the wonky laws mean a customer can purchase 70 units of Redecan Reign drops in one order, equaling about 60,000 mg of THC.

Do you see the stupidity of current cannabis equivalencies?

Yes, Canada is building a roadmap for the world to follow. But this little bit of regulation is a clogged up intersection that needs to be replaced with a free-flowing roundabout.

How do they taste?

As for the drinks themselves, I’ve tried Tweed’s Houndstooth and Soda and its Bakerstreet and Ginger. I’ve also tried Houseplant Grapefruit and Sparkling Water, and Everie’s Lemon and Lime drink.

The Houseplant drink is far and away my favourite. The grapefruit smell is pleasant and the taste is fresh and makes it easy (too easy?) to knock a few back.

The Houndstooth and Soda tasted a lot like nutmeg and weed — on its own, it’s not an overly appetizing flavour. Some have suggested adding some fresh lime to brighten it up.

The Bakerstreet and Ginger was much nicer than its bland counterpart, perhaps because of the significant difference in the amount of sugar.

Having only small amounts of THC per drink, I was pleasantly surprised to feel a gentle effect off of two drinks.

Lastly, the Everie drink tasted great, but at only 10 mg of CBD, it had pretty much zero effect.

The first order is available in B.C., with the second order to Saskatchewan.

Each drink contains 10 mg of THC and have a lower cannabis equivalent, allowing people to buy up to nine of them at one time. (Star Trek nerds, like me, may be tickled at the wordplay of Deep Space Nine.)

Early reports from Ontario have put a bit of a damper on my excitement, calling it, “Regret In A Can.”

Reddit user Vulcan905 posted his scathing thoughts on the “vile liquid from hell.”

“It smells exactly like it tastes: like a freakish combination of melted Jolly Ranchers, flat RC Cola, and some type of cleaning fluid,” says the reviewer. “It's so impossible to drink, I can only tolerate tiny sips. Why did I get five cans of this? Because I'm stupid…. How am I going to finish this one can? HOW am I going to get rid of the remaining four cans? Do I foist it on unsuspecting guests by showing them the latest cannabis drink? ‘Here, try this, you'll love it.’