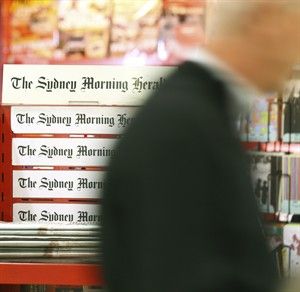 The company said it's giving itself the flexibility to ditch its print operations entirely at some point in the future if that's what consumers demand.

The job cuts at the Sydney-based media empire represent almost one fifth of its 10,000 staff, spokesman Brad Hatch said.

Fairfax said that its The Sydney Morning Herald and The Age broadsheet newspapers will become tabloids and their websites will introduce pay walls from early next year.

Australian staff were told in a memo that 300 jobs would be shed within three months in the cities of Sydney, Melbourne, Canberra, Brisbane and Perth. Half of these jobs would be editorial.

But the company's New Zealand CEO said the changes won't affect Fairfax's 2,500 employees there. Nor were there any plans to introduce pay walls for New Zealand newspaper websites.

Both sites have printing presses with significant surplus capacity which is no longer required, Fairfax said.