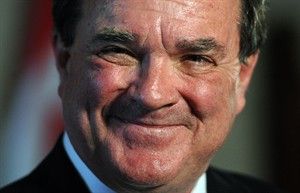 Photo: The Canadian Press. All rights reserved.
Finance Minister Jim Flaherty holds a press conference in the foyer of the House of Commons on Parliament Hill in Ottawa on Monday, May 14, 2012. THE CANADIAN PRESS/Sean Kilpatrick

OTTAWA - Finance Minister Jim Flaherty says there's no such thing as a bad job, and the unemployed need to rethink the type of work they consider too demeaning.

And Flaherty says Canada has to increase the labour pool by encouraging more handicapped, seniors and aboriginal people to work.

The minister made the comments in response to concerns that coming EI changes would eliminate benefits to unemployed who refuse to relocate or take jobs outside their field of training.

Flaherty says Canada will face severe labour shortages, and the government intends to reduce disincentives to work in the current EI system.

The specifics on the changes are to be unveiled by the human resources minister, but Flaherty's remarks suggest they may be profound.

Flaherty says he once had to take a job as a taxi driver and hockey referee, adding that the only bad job is no job.