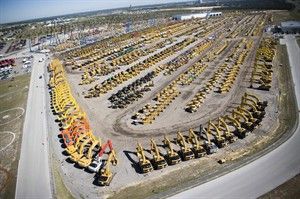 Pent up demand for industrial equipment as a result of manufacturer backlogs helped Ritchie Bros. Auctioneers Inc. (TSX:RBA) put the hammer down on impressive numbers in the first quarter.

"We are pleased to have achieved record first-quarter gross auction proceeds and auction revenues," CEO Peter Blake said in remarks released along with Ritchie's earnings report on Thursday.

Originally a Kelowna based, Ritchie is now the world's largest auctioneer of industrial equipment, said both net and adjusted earnings for the quarter were US$18 million or 17 cents per diluted share.

Auction revenues in the three months ended March 31 were US$101.3 million, up 14 per cent from $88.5 million in 2011, while gross auction proceeds were US$865 million, two per cent higher than in the year-earlier period.

Blake said ongoing backlogs at original equipment manufacturers had created pent up demand for new and near new equipment, driving strength in the used equipment market.

"During the quarter we saw strong equipment pricing at our auctions and competition remained intense for good quality, low-hour used equipment," he said.

On the Toronto Stock Exchange, Ritchie shares were up 39 cents at $21.12 Thursday morning.