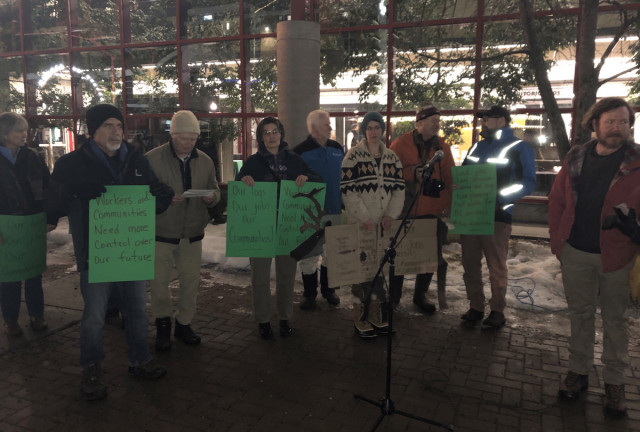 About 100 people gathered in Prince George Tuesday night to show their support for workers facing layoffs at Canfor’s local pulp and paper mill.

On Jan. 11, Canfor Pulp announced it would permanently close the pulp line at the mill by the end of the first quarter of 2023. The move was expected to result in roughly 300 jobs being cut, and reduce Canfor production by 280,000 tonnes of market kraft pulp annually. he specialty paper facility at the mill is expected to remain open.

“It is an affront to all of us that 300 people in our community have lost their jobs...”  Michelle Connolly of Conservation North said. “We're not divided, we all want the same things here."

Tuesday’s rally was held outside the opening banquet for the BC Natural Resources Forum, where Premier David Eby was the guest speaker. On Tuesday afternoon, Eby announced $90 million in funding for the new BC Manufacturing Jobs Fund, to support industrial and manufacturing projects in rural, remote and Indigenous communities.

The rally was organized by Stop the Spray BC, Conservation North and the Stand Up for the North Committee. In statements issued before the rally, the organizers said they want to see more local decision making and long-term planning, to sustainably support forestry jobs and the environment.

Connolly said its not conservation which has caused the layoffs, as there has been no new cariboo habitat protected in the area since 2003, and the old growth deferals in the area were not done.

"We want to set the record straight," said James Steidle of Stop the Spray BC.

Peter Ewart of the Stand Up for the North Committee said the B.C. forestry sector has great potential, but local communities, workers, unions and smaller industry players need to have a greater role in deciding what happens with those public resources.