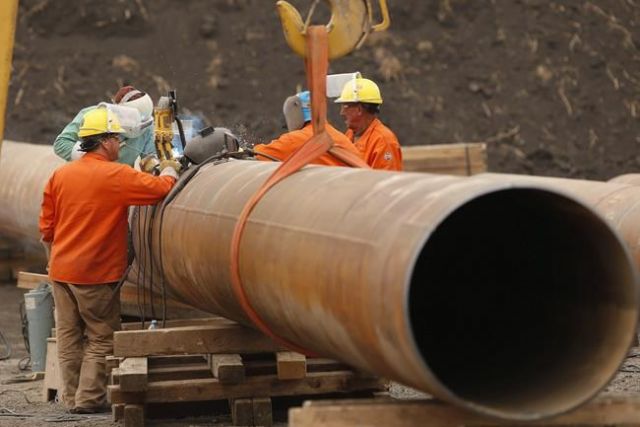 Enbridge Inc. has extended its push into liquified natural gas as global demand soars, scooping up a stake in a proposed LNG project on the West Coast.

On Friday, the Calgary-based energy company announced a deal to jointly invest in the construction and operation of the Woodfibre LNG processing and export facility near Squamish.

Under the partnership agreement, Enbridge will buy a 30 per cent ownership stake in the $5.1-billion venture, with Pacific Energy retaining a 70 per cent stake.

"Expanding global access to natural gas through LNG will play a critical role in North America's energy future and will help to reduce the world's greenhouse gas emissions through the displacement of coal-fired power generation."

The announcement comes as U.S. benchmark natural gas prices approached US$9 per mmBTU this week amid concerns about global energy security and Russia's invasion of Ukraine.

Monaco has been vocal in recent months about his belief that natural gas exports represent the largest opportunity for North America right now, and said Enbridge is seeing a strong pick-up in commercial interest from Asia and Europe to secure export capacity.

The project, which Woodfibre LNG said in 2017 would likely begin two years later, stated earlier this year it expects major construction to get underway in 2023, issuing in April a notice to proceed to McDermott International, its main contractor.

Planned for the site of a former pulp and paper mill, the plant is slated to pump out 2.1 million tonnes of LNG per year, with a storage capacity of 250,000 cubic metres.

In 2017, the National Energy Board approved a 40-year export licence for the facility. The project has also received environmental green lights from the provincial and federal governments as well as the Squamish First Nation, which gave the go-ahead following a $1.1-billion benefit agreement.

Ratnesh Bedi, president of Pacific Energy, which is owned by Singapore-based RGE, said the investment "further accelerates Canada's ability to be a meaningful player in the global energy transition with the production of the world's lowest carbon LNG."

Woodfibre LNG will use electric motor drives powered by hydroelectric energy, making the plant "one of the lowest-emission LNG export facilities in the world," Enbridge said.

On Friday, the company reported that earnings attributable to common shareholders dropped in its most recent quarter despite higher revenue.

Revenue in the three months ended June 30 was $13.22 billion, compared with $10.95 billion in the prior year quarter, the company said.

Enbridge reaffirmed its 2022 financial guidance for earnings before interest, taxes, depreciation and amortization of between $15.0 billion and $15.6 billion and distributable cash flow of $5.20 to $5.50 per share.

It said strong operational performance is expected to be offset by challenging market conditions affecting energy services and higher financing costs due to rising interest rates.

In a statement, Monaco said the company continued to progress on its key priorities during the quarter.