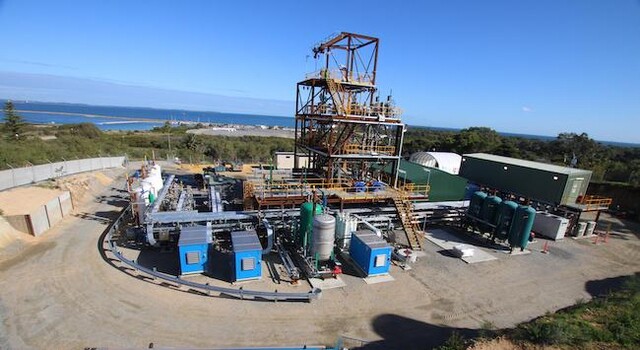 FortisBC has partnered with Alberta's Suncor Energy and Australia's Hazer Group to build a pilot plant that will make hydrogen from natural gas, as well as syntheic graphite.

The $11.25 million pilot project is receiving $8 million from the CleanBC Industry Fund, according to Joe Mazza, vice president of energy supply and resource development for FortisBC.

“Hydrogen is critical to our transition to a cleaner, low-carbon energy system," said Bruce Ralston, minister of Energy, Mines and Low Carbon Innovation.

"We are supporting innovation like the Hazer Process with B.C. Hydrogen Strategy and CleanBC. The Hazer process is helping us achieve our climate goals while supporting good-paying jobs for British Columbians”.

The new plant will be built at Suncor's Burrard terminal in Burnaby. Should the pilot project move to full commercial scale, it would produce 2,500 tonnes of low-carbon hydrogen annually, which is roughly equivalent to the natural gas used to heat 3,300 homes in B.C.

Some "grey" hydrogen is produced in B.C. as a byproduct of industrial chemical processes, but there is currently no domestic producer of zero or low carbon hydrogen.

Currently, there are two main ways to make low carbon hydrogen: "green hydrogen" from electrolysis, using water and electricity, and "blue hydrogen" from natural gas using methane steam reforming and carbon capture and use or sequestration.

The Hazer Group is one of the companies developing a third way of producing low or zero-carbon hydrogen: methane pyrolysis. This process uses natural gas, but it obviates the need for carbon capture and storage, as it produces solid carbon that can be easily transported for a variety of industrial uses.

B.C.'s Ekona Power, for example, has developed a methane pyrolysis process that would use natural gas to produce hydrogen and solid carbon -- also sometimes called "carbon black," which can be either simply landfilled or used as an additive for things like tires and other rubber products.

In the Hazer Group's case, the process would produce synthetic graphite, which is a crystalline form of carbon. Graphite has many commercial applications, including lithium-ion batteries.

Mazza said FortisBC and its partners expect the engineering, permitting and design work to build a prototype methane pyrolysis reactor to be complete by the end of 2023.

"If it moves to full construction, the entire plant, we're looking at (2025-2026) timeline," he said. "So it's early days, but it's a very exciting opportunity to scale up a process that we think has enormous potential, particularly hydrogen, here in B.C."

FortisBC built the first LNG terminal in B.C. on Tilbury Island. It was initially used solely to back up the company's pipeline and storage to deal with peak demand and pipeline outages.

But the plant was expanded a few years ago to also produce LNG for transportation -- i.e. ships and trucks powered by natural gas -- as well as some exports to Asia via ISO container.

FortisBC has also been developing sources of renewable natural gas, as part of its 30BY30 plan, which aims to reduce the CO2 emissions intensity of its natural gas by 30 by 2030.

That plan involves injecting ever increasing amounts of renewable natural gas and hydrogen into the natural gas system.

"Currently we're close to almost 10% of renewable natural gas under contract," Mazza said. "We're ahead of schedule on renewable, low-carbon gases than we thought we'd be for our 2030 target, and this is just another part of that puzzle."

Mazza said the methane pyrolysis approach that will be piloted in B.C. has tremendous promise, because these plants can conceivably be built anywhere there is source of natural gas.

"As we scale this up, and as we build it out, there's opportunity to develop what we call hydrogen hubs where we actually produce hydrogen right near the demand centre," Mazza said.

"Renewable and low carbon gases, like hydrogen, are instrumental in reducing greenhouse gas emissions effectively and affordably while ensuring we have a resilient and diversified energy system for British Columbians,” said FortisBC CEO Roger Dall’Antonia.