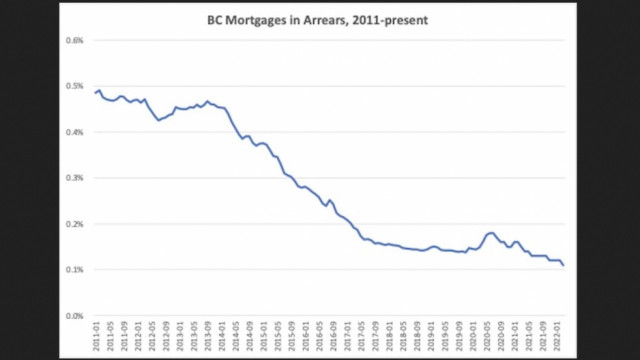 Photo: Image: Western Investor/Canadian Bankers Association.
The rate of mortgages in arrears in B.C. has been in long-term decline since the start of 2011.

Despite fears of rising interest rates and worsening affordability in the residential market, statistics from the Canadian Bankers Association indicates that mortgages in arrears are on the decrease in B.C.

The number of mortgages in arrears has been in long-term decline since peaking at 0.49 per cent in early 2011. Despite rising to 0.18 per cent during the early summer of 2020 as borrowers adjusted to the financial turbulence caused by the pandemic, the arrears rate in B.C. has been trending down since January 2021.

B.C.’s rate is the lowest in Western Canada, and the second lowest in the country after Ontario, where just 0.06 per cent of mortgages were in arrears.

Most provinces in Western Canada have seen the rate of mortgages in arrears improve over the past year. In Alberta, the rate now stands at 0.44 per cent. In Manitoba, the rate is 0.28 per cent.

The one exception is Saskatchewan, which led the country in March with an arrears rate of 0.62 per cent. While this is a significant improvement from 0.76 per cent a year ago, it is an increase of two basis points since last fall.

The long-term decline in arrears in B.C. reflects the strength of the provincial economy.

A cooling trend could change the picture, however. TD Economics flags the risk high levels of household debt in B.C. pose in its provincial economic forecast released June 22.

“Households in the province are carrying the largest debt burden in the country, enhancing their exposure to higher interest rates,” it said.

While mortgage statistics indicate that homeowners have so far been able to service those high debt levels, this may not be the case if the economy slows.

TD Economics forecasts at economic growth in B.C. to drop by more than half over the next year. A similar decline is expected in the other Western provinces. Alberta is set to weather the storm best, with growth of 5.5 per cent this year and 2.8 per cent next year – the strongest in Western Canada.