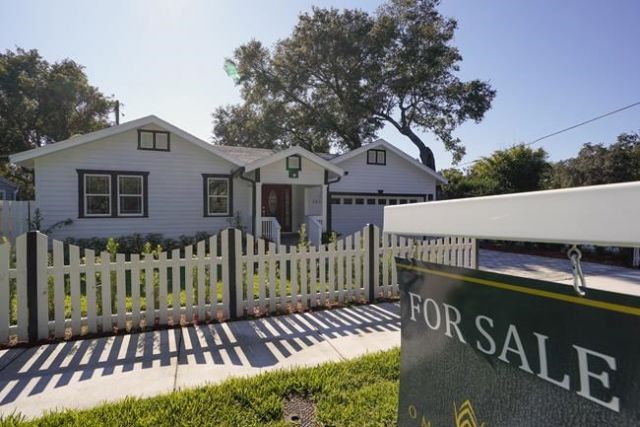 That annual sales pace was higher than what economists had expected, according to FactSet. Sales fell 8.6% from May last year.

After climbing to a 6.49 million annual rate in January, sales have fallen to the slowest pace since June 2020, near the start of the pandemic, when they were running at an annualized rate of 4.77 million homes.

Even as home sales slowed, home prices kept climbing in May. The national median home price jumped 14.8% in May from a year earlier to $407,600. That’s an all-time high according to data going back to 1999, NAR said.

The housing market, a crucial part of the economy, is slowing as homebuyers facing sharply higher home financing costs than a year ago following a rapid rise in mortgage rates.

Average long-term U.S. mortgage rates had their biggest one-week jump in 35 years with the Federal Reserve last week raising its key rate by three-quarters of a point in a bid to combat the worst inflation in 40 years.

The average rate on a 30-year home loan climbed to 5.78% last week, the highest its been since November of 2008 during the housing crisis, according to mortgage buyer Freddie Mac.

The rise in mortgage rates follows a sharp move up in 10-year Treasury yields, reflecting expectations of higher interest rates overall. The Fed has signaled its intention to to keep hiking its short-term rate as it tries to cool off the U.S. economy without causing a recession.

The weekly average on the 30-year rate hovered slightly above 5% for much of May, so the more recent increases in rates have yet to be reflected in the home sales data.

“Today's mortgage rates are knocking on the door of 6%,” said Lawrence Yun, NAR’s chief economist. “Given those conditions, I do anticipate further declines in home sales.”

Some real estate trends favored buyers last month. As is typical this time of year, the number of homes on the market increased in May from the previous month. Some 1.16 million properties were available for sale by the end of May, up 12.6% from April, but down 4.1% from April last year.

Even so, at the current sales pace, the level of for-sale properties amounts to a 2.6-month supply, the NAR said. That’s up from 2.2 months in April, and 2.5 months a year ago. That's still short of the 4-month supply that reflects a more balanced market between buyers and sellers.

Yun expects the inventory of homes for sale will be running above year-ago levels by autumn.

This year's pullback in home sales has led some economists to adjust their housing market outlook for 2022. Realtor.com is now expecting U.S. home sales will decline 6.7% from last year. That would still make 2022 the second-best year for home sales since 2007 behind 2021, according to Danielle Hale, Realtor.com’s chief economist.

Yet even with higher mortgage rates straining affordability, homes that sold didn't stay on the market for long. On average, homes sold in just 16 days of hitting the market last month, the fastest sales pace tracked by the NAR. It was 17 days in April.

First-time buyers accounted for 27% of transactions, down from 28% the previous month and 31% in May last year, the NAR said.

Real estate investors and other buyers able to buy a home with just cash, sidestepping the need to rely on financing, accounted for 25% of all sales last month, down from 26% in April, NAR said.