Sale of Freedom Mobile to Quebecor not enough for competition, says telecom watcher

Sale of Freedom not enough 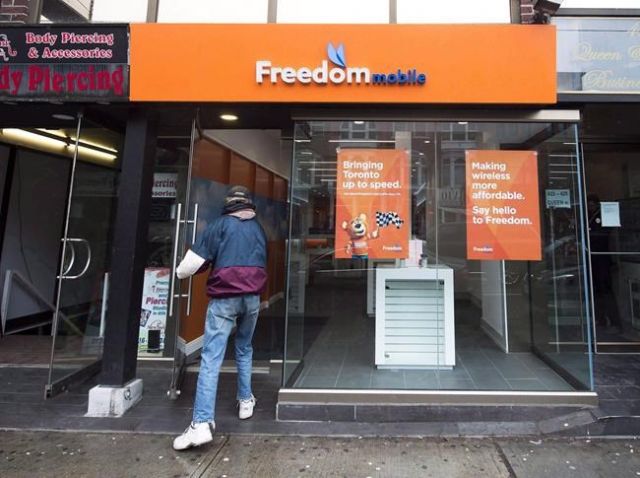 Photo: The Canadian Press
A man enters the store at the new rebranded signage of Freedom Mobile, in Toronto on Thursday, November 24, 2016. Carelton University professor Dwayne Winseck says it won't be easy for Videotron Ltd., which has only operated in Quebec and parts of eastern Ontario bordering Quebec, to expand nationally making it less of challenger for Rogers. THE CANADIAN PRESS/Nathan Denette

Carleton University professor Dwayne Winseck saidit won't be easy for Quebec-based Videotron to expand nationally, making it less of a challenger for Rogers.

Winseck said Videotron, which only operates in Quebec and parts of eastern Ontario, has had national ambitions for a while, but lacks brand recognition and hasn't been able to strike strong deals with other national carriers, despite having fairly deep pockets.

Over the weekend, Rogers said it would sell Freedom to Quebecor for $2.85 billion, as it looks to get its $26 billion takeover of Shaw Communications Inc. over the finish line, arguing that the move would give Canadians "competition and choice."

The deal will see Quebecor buy all of Freedom's branded wireless and internet customers, as well as its infrastructure, spectrum and retail locations.

Winseck, whose expertise is media and communications, points to Shaw's strong presence in Western Canada and the fact that its wireless service, Shaw Mobile, won't be divested as part of the merger as another reason why it likely won't be an easy go for Videotron as it tries to expand across Canada.

The Competition Bureau has been seeking to block the merger over concerns it would substantially lessen wireless competition, and the sale of Freedom was widely expected to be a condition of regulatory approval.

In new submissions made to Competition Tribunal on Friday, the regulatory agency expanded its opposition to the proposed takeover, challenging the telecom giant's claims about efficiencies and economic benefits, while arguing that consumers will be faced with higher prices.

"I don't think it's going to go far enough for the Competition Bureau," Winseck said.

However, some analysts think the sale will move the deal forward and quell the bureau's competition concerns.

"We believe this agreement increases the prospect of the transaction closing to over 95 per cent," Canaccord Genuity analyst Aravinda Galappatthige wrote in a note to clients.

"We believe (Quebecor's) strong operational track record, balance sheet, expertise and asset mix will make it more difficult for the regulator to argue that the Canadian wireless competitive landscape will be materially affected by the (Rogers-Shaw) merger," said Desjardins analyst Jerome Dubreuil in a note to clients.

Quebecor was not the only contender in the mix leading up to this decision.

Globalive Capital's Anthony Lacavera had been very vocal about his firm's interest in buying Freedom, formerly Wind Mobile, which he founded in 2008. Halifax-based telecom company, Eastlink, and Xplornet Communications Inc., a New Brunswick-based rural internet provider, were also said to be interested in Freedom.

Winseck doesn't believe there is another buyer that would create a strong enough fourth competitor.

"To me, the only viable alternative would be for somebody to come in that isn't one of the existing players to take over Shaw lock, stock and barrel," he said.

So far, the Rogers-Shaw transaction has received approval from the Canadian Radio-television and Telecommunications Commission. It still requires approval by the Competition Bureau and Innovation, Science and Economic Development Canada.

Competition Tribunal hearings on the matter are scheduled to begin the week of Nov. 7.

Rogers and Shaw shares were among the leading companies in trading on the Toronto Stock Exchange, gaining 6.4 and 8.3 per cent respectively.