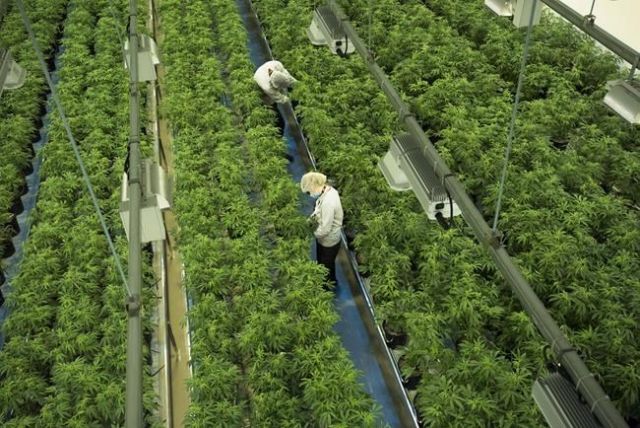 Canopy Growth Corp. has signed a deal that will give it the right to acquire California cannabis company Jetty Extracts, if the U.S. federally legalizes the main ingredient in marijuana.

The deal announced Wednesday is structured as two separate option agreements that give a subsidiary Smiths Falls, Ont.-based Canopy set up the ability to acquire up to 100 per cent of Jetty's equity interests upon legalization or if Canopy exercises its rights earlier.

Under the agreements, Canopy will make aggregate and upfront payments of cash and common shares totalling about US$69 million in exchange for a 75 per cent interest in Jetty, which is registered as Lemurian, Inc.

Once Canopy exercises its right to acquire all of the interests, it will begin making extra payments through cash and common shares.

The deal is meant to lay the groundwork for Canopy's expansion into the U.S. should the country look to turn its patchwork of cannabis policies into a single federal stance.

Marijuana is currently legal for medical purposes in about 39 states and for recreational use in roughly 19. However, federal laws still consider it a Schedule I controlled substance with high risk of abuse and no accepted medical use, putting it in the same class as drugs like heroin and peyote.

In recent months, the U.S. has been edging toward federal legalization through the More Act, which would declassify marijuana as a controlled substance, eliminate criminal penalties around its use and establish a system to expunge cannabis convictions.

In the event the act passes, Canadian cannabis companies have been scrambling to buy U.S. assets and plot a path into the market, which some suggest will be more lucrative than Canada's.

The Jetty deal will give Canopy a foothold in California, the U.S.'s largest market for tetrahydrocannabinol (THC), the component responsible for marijuana's psychoactive side-effects.

"There are significant opportunities for Jetty to scale at the state-level across the U.S. by leveraging Canopy’s U.S. ecosystem, and we’re actively working on plans to bring the brand to the Canadian recreational market," said Canopy CEO David Klein, in a news release.

Oakland-based Jetty is known for making solventless vapes, unrefined resin, small batch concentrates and infused pre-rolls. The company was founded in 2013 with the goal of removing harmful additives from vapes, which it produces with just ice, water, heat, and pressure.

Until Canopy exercises its rights, the companies will operate independently of one another and Canopy and the subsidiary will not hold any economic or voting interests in Jetty.

Last month, Canopy announced it would lay off about 243 workers as part of a new cost reduction strategy meant to make its cannabis cultivation more affordable and uncover supply chain efficiencies. It reported a net loss of $115.5 million in its latest quarter.

Ahead of the Jetty announcement, its stock closed at $7.54 on Tuesday.