80 to lose jobs at fish plant 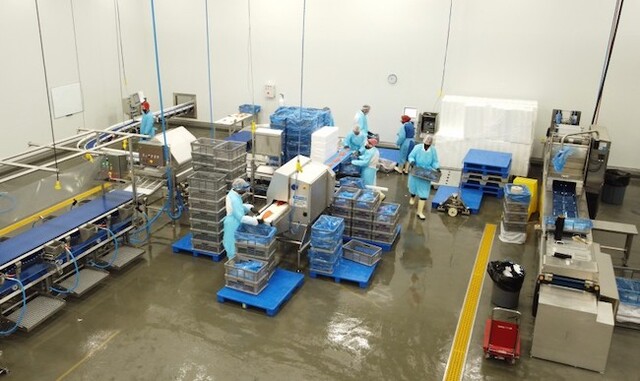 Eighty fish processing plant workers in Surrey will lose their jobs in March.

Mowi Canada West announced today that it will permanently close its fish processing plant in Surrey in March.

“This is a direct result of the (federal) government decision on the Discovery Islands,” said Dean Dobrinsky, head of human resources and communications for Mowi Canada West.

Mowi’s processing plant in Port Hardy does primary processing – i.e. gutting – and the Surrey plant further processes the fish into fillets. All of that secondary processing work will now be sent to processors in the U.S., Dobrinsky said.

Mowi’s 23,000-square foot processing plant only went into operation four years ago, in December 2017, but is now being shut down, as a result of an order in 2020 by then Fisheries and Oceans Minister Bernadette Jordan to have all open-net salmon farms removed from the Discovery Islands by June 2022.

The order, which came down in December 2020, followed marching orders from Prime Minister Justin Trudeau to the federal fisheries minister. In a mandate letter, he ordered the minister to plan the phasing out of open-net salmon farms in B.C.

No such mandate was given for salmon farms in Atlantic Canada.

Mowi held the bulk of federal licences for the 19 salmon farms in the Discovery Islands. They accounted for 30% of Mowi’s production in B.C.

As a result of the eviction, Mowi has had to euthanize 6.8 million juvenile salmon, and 140 salmon farm workers have either been laid off or have quit and not been replaced – about 25% of the company’s salmon farm workforce in B.C. When the Surrey processing plant shuts down around the end of March, that will bring the total job losses to 220.

At the time the order was given to begin vacating the Discovery Islands, Dobrinsky said the minister at the time – Bernadette Jordan – promised some kind of transition that, presumably, would include supports for workers who lost their jobs.

Dobrinsky said the industry has heard nothing from either Jordan or her successor, Joyce Murray, who is the new federal fisheries minister.

In a federal government news release in December, 2020, Jordan was quoted as saying: “I am committed to working with all involved parties; the First Nations, industry and the Province of British Columbia, over the next 18 months to ensure a fair and orderly transition process that phases out salmon farming in the Discovery Islands.”

“She promised that there would be transition and that they would be talking to the companies. We’ve heard not one word from the government since.”

"The livelihoods of hardworking Canadians will be impacted, and that is not lost on Minister Murray," Claire Teichman, Murray's press secretary, said in an emailed response to Dobrinsky's criticism that there have been no support for workers from the federal government or contact with the industry.

"Our government has existing programs available for the workers who are impacted by this decision through Employment and Workforce Development.

"Our government believes in a sustainable, environmentally-conscious aquaculture industry. We will continue to support it by finalizing our plan to transition from open-net pens in B.C. coastal waters; investing $10 million through Budget 2021 in new and sustainable aquaculture technology; investing in new approaches to planning and managing aquaculture activities in priority areas in B.C.; and developing Canada’s first-ever, national Aquaculture Act that will create more transparency and clarity across the industry."

Mowi and other salmon farm companies in B.C. are awaiting a decision from the Federal Court on a judicial review of Jordan’s order. The companies argued in court that Jordan overstepped her authority in ordering all operations in the Discovery Islands shut down. They are hoping for a decision early this year.