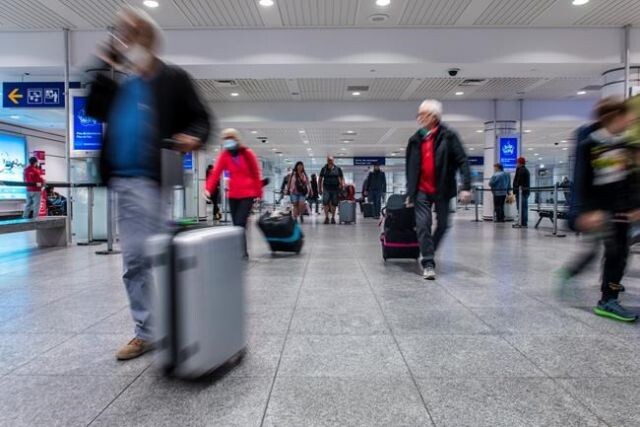 If you're tempted to catch a flight in the near future, be warned – it might get cancelled.

While the federal government advises against international travel right now, there isn't anything stopping you from catching a plane to most destinations.

Additionally, countries around the world are updating their entry and exit requirements. For example, China has banned flights from Vancouver International Airport as a growing number of travellers have tested positive for the virus upon arrival to the country.

From Vancouver to Los Cabos

I travelled from Vancouver to Los Cabos, Mexico, in early December, right before the government issued the non-essential travel advisory. While I was able to travel with relative ease, there were some tense moments along the way. For one, the process of checking in for your flight is more complicated now, because you have to show federal proof of vaccination. While this may not seem like a complex matter, it throws an additional wrench into the check-in system.

I flew with WestJet and everything was done at their self-serve kiosks. There were only a couple of airline staff assisting a huge crowd of travellers with the check-in process and many people relied on other travellers to get them through the prompts. Most folks weren't familiar with scanning the recently-issued document from their phone, which slowed everything down. Naturally, the best way to avoid feeling flustered is to give yourself ample time.

Once you check your bag, you'll head to airport security. When I was travelling, the domestic gates were significantly busier than the international. So, if you plan to travel within Canada right now, don't assume that the check-in process will be a breeze. That said, the security check-in process is relatively the same (ie. have your liquids in small bottles and in bags, don't bring food, etc) and you'll need to separate your clothes and bags into the bins—pretty standard stuff.

You need to sport your face mask in all areas of the airport and you may only remove it when you're eating or drinking. For the most part, travellers reserved their eating and drinking for the designated areas. However, some people lifted their masks by their gates to have a sip and then covered their faces immediately after.

What to know before you go

While my check-in flight was fairly stress-free, except for the minor frustration of getting my proof of vaccination scanned, there were several items I prepared in advance of travel. For one, I made sure I knew where to get a PCR test in my destination before I left—this will save you plenty of frustration overseas when you should be enjoying your holiday. Second, I put all of my travel details into the ArriveCAN app well in advance of travel, despite the fact that I only needed to enter it within 72 hours of my return trip home.

The reason it is imperative to start this process before you go is that it requires you to show physical proof of vaccination and provide other personal details. If you are unable to produce any of this information while you are in another country, you may be denied boarding.

Checking into the airport at Los Cabos was relatively easy. A WestJet employee asked to see my ArriveCAN proof but that process was simple. I also made physical copies of all my documents in case the internet was down or my phone died.

While my outbound flight was direct, my return trip involved a connection in Calgary. If the first flight would have left on time I would have had time to collect my checked bag in Calgary and take it through customs to board the final leg of my journey. However, my plane was late arriving in Los Cabos from Calgary due to winter weather conditions. As a result, our flight arrived quite late in Calgary.

Keep in mind that when you fly internationally and have a domestic connection you'll have to take your checked luggage through customs. I ended up missing my second flight because they finished boarding right after I ran across the airport (running is a lot harder all masked up and carrying a heavy bag!)

This seemed like a nightmare at the time, but WestJet booked numerous passengers and me on the next flight free of charge. I came home a couple of hours later than I had planned to but I take that as a win considering how bad it might have been.

As I was going through security, I noticed that several people were being tested upon arrival for COVID-19. However, the passengers on my flight that were making the connection to Vancouver didn't get tested because of the time. With this in mind, this was during the period when YVR and other Canadian airports were just rolling out their respective travel testing programs.

One other thing that really stuck out during the experience was the lone man who became belligerent when asked to show proof of vaccination. Luckily, he was an anomaly; he was the only person I saw take an issue with the pandemic-related rules. That said, it is something to consider as tensions run high: be aware of your surroundings and stay safe.

What to know about travel right now

Disclaimer: Glacier Media does not support travel during the non-essential travel advisory. Many foreign governments are implementing strict travel restrictions due to the spread of the Omicron variant and international transportation options may be limited. As a result, you may have difficulty returning to Canada.