WestJet to cut 15% of flights 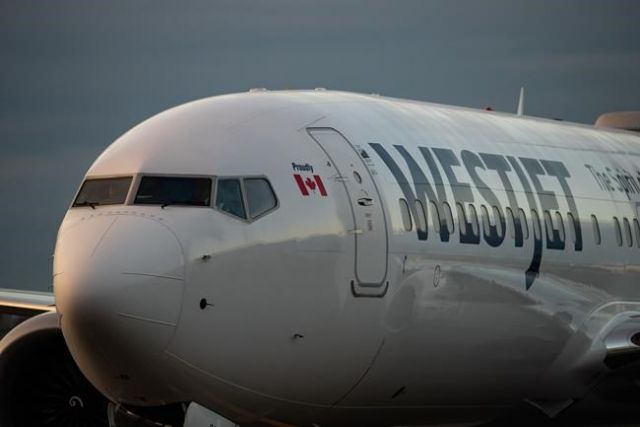 WestJet Airlines Ltd. is dealing with so many employees out sick with the Omicron variant that it is being forced to cut 15 per cent of its scheduled flights through to the end of January.

WestJet spokeswoman Morgan Bell confirmed via email that the airline has seen a 35 per cent rise in active COVID-19 cases among staff in recent days, with 181 employees currently testing positive for the virus.

In a statement Thursday, WestJet's interim chief executive Harry Taylor said the airline has seen a significant increase in delays and cancellations impacting its business over the past 72 hours.

"We could not have anticipated the rapid and unpredictable impact of the Omicron variant on our people and operations, coupled with prolonged frigid temperatures across Western Canada and global staffing shortages," Taylor said.

"Despite all contingency planning, in addition to hiring back thousands of WestJetters to safely support peak operations, we find ourselves no longer able to predictably resource our planned schedule due to Omicron impact."

As a result of the staff shortages, WestJet will remove about 15 per cent of flights from its schedule through Jan. 31. Prior to the cuts, which will be implemented over the next few days, the airline has been operating 450 flights per day.

The move is a "last resort," Taylor said, but reflects the reality of the service level WestJet can now "realistically deliver."

"It is the best option to ensure the availability of our frontline staff and third-party service providers, while minimizing the impact on our guests," he said.

WestJet said it will notify all customers with affected flights. For any WestJet-initiated cancellation or schedule change, where the schedule change was greater than 90 minutes or one or more stops were added, guests are eligible for a refund.

The announcement comes as more than 850 flights were cancelled in the U.S. on Wednesday, according to data from the flight-tracking website FlightAware. There were nearly 1,300 cancellations for flights entering, leaving or inside the U.S. Tuesday, and about 1,500 on Monday.

Both Delta Air Lines and United Airlines said the nationwide spike in cases this week has affected flight crews and left carriers short-staffed.

Canadian airlines across the board have seen an uptick in flight delays and cancellations this week. However, Air Canada said Monday that adverse weather has been the major factor, rather than COVID-19.

Air Transat said Monday it had not cancelled any flights due to Omicron, while both Porter Airlines and Flair Airlines said they have seen a small uptick in sick calls and staffing issues.

The federal government requires both Canadian airline employees and passengers departing from Canadian airports to be fully vaccinated against COVID-19.

On Thursday, WestJet said additional measures from federal and provincial governments are "urgently needed" to minimize further disruption to the aviation sector.

In his statement, Taylor called for the removal of "inconsistent provincial isolation requirements that are restricting staffing abilities."