Waiting to 'make it rain' 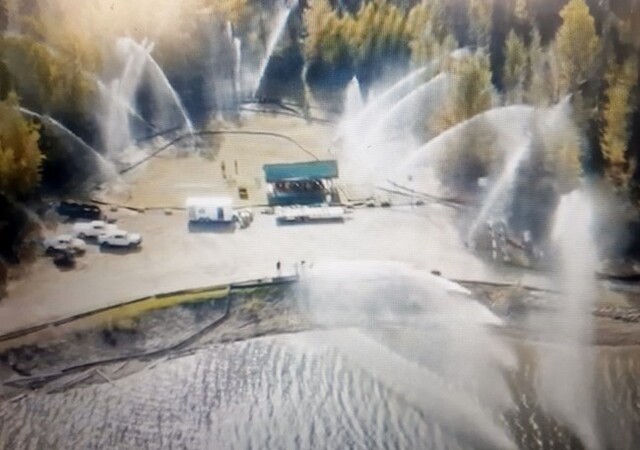 Jeff Kelly is no weather god – but he does have the ability to make it rain.

Kelly owns and operates Safeguard, a Fort St. John-based emergency response company that specializes in mass water deployment as a means of dousing wildfires, especially in instances where towns are threatened. The company’s innovative firefighting system utilizes powerful pumps and manifolds that draw vast amounts of water from lakes and rivers to feed high-pressure water cannons that can soak forested areas or buildings.

“We can employ enough water cannons to do a 20-kilometre water curtain that is 200 feet high by 320 feet wide,” said Kelly. “Each system will pump 3,000 feet and we put multiple systems beside each other. In our Fort St. James dispatch (fighting the Shovel Lake fire in 2018) we had seven systems to do a 10-kilometre curtain. Each of these systems will pump 7.6 million gallons of water in 24 hours.

“Where mass water shines is when you have immediate access to a lot of water, you have good enough road access to pull the semi trucks right up where you deploy. One of our pumps can push water to 700 fire hoses.”

During times when not much water is needed on the fire, the pumps can be used to fill holding tanks or structural protection and create water supplies for fire trucks or sprinklers.

Safeguard employs a full-time staff of nine and Kelly says he has 210 firefighters trained and ready to go, with contractors available to back them up. With dry lightning in the forecast for the Okanagan, Peters moved some of his equipment to Vernon, where he awaits word from the BC Wildfire Service if and when he will be hired.

In a July 12 BC Wildfire Service update letter sent to forest industry leaders, Rob Schweitzer, director of fire operations for the Kamloops Fire Centre, said the hot, dry weather is expected to continue for the next two months and with the province dealing with as many as 45 new fires every day, the Wildfire Service will need every available resource within its own ranks as well as industry support and assistance. The BCWS is also asking forestry companies to fight fires independently because there are not enough Wildfire Service staff to do the job.

The BCWS has approached the BC Cattlemen’s Association and Indigenous communities for equipment and other resources and has engaged the military to assist in mop-up operations.

Safeguard’s water curtain crews have been dispatched three times by the B.C. government to fight fires (Elephant Hill fire in 2017, Shovel Lake, and Burns Lake fires in 2018). But so far this year, they have yet to be deployed.

Kelly feels an attachment to his home province and can’t understand why the BC Wildfire Service, facing one of its worst-ever fire seasons, has not yet asked his company to join in the fight. His water cannon system costs one cent per gallon of water to operate, compared to the $3 per gallon it costs to use a water bomber to dump its load on a flaming forest.

“The province says they are using resources all across Canada and now they’re bringing in worldwide resources, yet we have millions of dollars of resources and professional people waiting in Fort St. John,” said Kelly.

“The wheels of change and innovation in government turn ever so slowly. This is something new. I hope they will see the value in what we’re offering.”

Safeguard’s water intake equipment is heavy and requires semitrailer or skid-steer road access to move it close to water supplies. The equipment can be positioned with two crew members on standby for $5,000 per day and $10,000 per day when operating with a full crew. Considering air tankers for fighting fires can cost up to $8,000 per hour, Kelly says his company’s services are extremely cost effective.