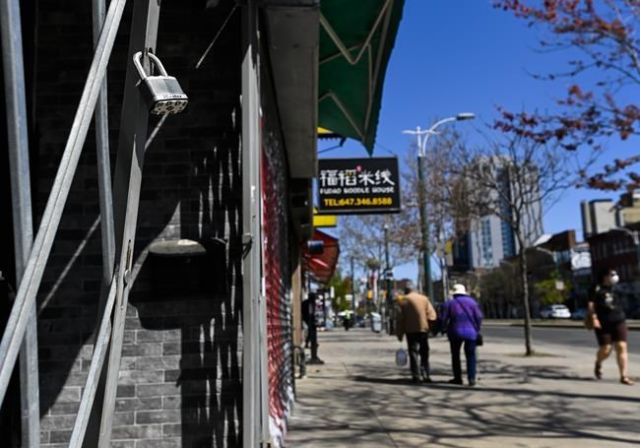 Photo: The Canadian Press
People walk past businesses on Spadina Avenue in Chinatown in Toronto on Thursday, May 13, 2021. Restaurant owners are concerned about operations as subsidies begin to wind down, even as provinces like Ontario extend stay-at-home or lockdown measures. THE CANADIAN PRESS/Nathan Denette

Restaurant owners are voicing concerns they'll be able to keep operating when federal subsidies begin to wind down, even as provinces like Ontario extend stay-at-home orders or lockdown measures.

A group representing Canada's foodservice industry is seeking an exemption from the federal government's scheduled phase-out of the wage and rent subsidy programs, both of which will gradually be decreased as vaccinations become more widespread.

Half of the country's restaurants face the risk of closure if subsidies are scaled back too soon, Restaurants Canada says.

"As the hardest hit sector, we need these subsidies to continue to support us; measures like this that keep people at work," said Olivier Bourbeau, Restaurants Canada's vice-president for federal and Quebec.

The government programs currently provide businesses a subsidy of up to 75 per cent of paid wages and up to 65 per cent of rent. Beginning July 4, both will be scaled back to 60 per cent before being phased out later in the summer.

Bourbeau said that even with widespread vaccinations and reopened businesses by September — which isn't a certainty — restaurants will still not be operating at full capacity because of safety measures like distancing.

"We are not up and running 100 (per cent), so it will be difficult for us even though we are open," he said, adding that an average restaurant will need 12 months after reopening to return to profitability.

Katherine Cuplinskas, press secretary for the Minister of Finance, said in an email that businesses may be able to benefit from other government support measures such as the Canada Recovery Hiring Program and the Small Business Financing program when the wage and rent subsidies wind down.

"The federal government actively assesses its support measures to ensure workers and businesses have the support they need," said Cuplinskas.

Restaurants Canada said there will likely be additional job losses in the industry as some provinces extend or increase dining restrictions.

"The current situation with British Columbia, Ontario and Quebec is really, really difficult for us because everything's closed," said Bourbeau.

On Thursday, Ontario extended until June 2 its stay-at-home order, which restricts in-person service and patio dining at restaurants.

With this latest extension, the majority of the province’s restaurant dining rooms will have been closed for a total of 362 days since the pandemic started, Restaurants Canada noted.

"Our industry definitely won't be back when they start to cut things in July," said James Rilett, the group's vice-president for central Canada, in a statement after the announcement.

According to its survey data, more than eight in 10 Ontario restaurants are operating at a loss or barely scraping by.

Rilett said Ontario's extended lockdown "exasperates everything" and the wage subsidy "means nothing" to businesses that have had to cut down on employees during the pandemic.

He said Restaurants Canada hopes the subsidies would be kept in all provinces as restaurants still have been accumulating debt and still face restrictions throughout the summer.