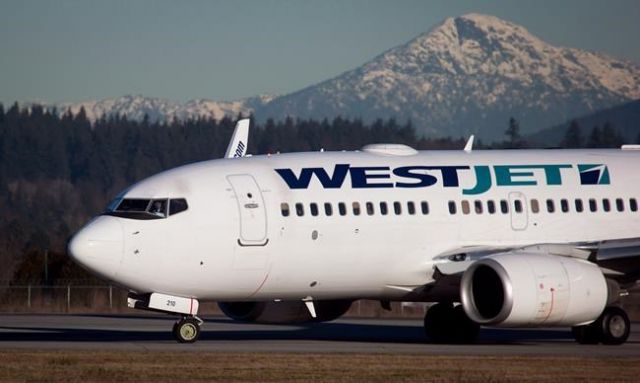 WestJet Airlines Ltd. says strong demand, higher-paying passengers and its new ultra-low-cost subsidiary will bolster revenue in 2019 as the company continues its transition from regional airline to international player.

“We’re not seeing any potential slowdown in our booking curve,” said John Weatherill, vice-president in charge of pricing and revenue.

Despite tight domestic competition and volatile fuel prices, the Calgary-based company aims to boost revenue per available seat mile — an industry metric of how much cash each seat on the plane brings in — by between two per cent and four per cent in 2019.

“It's the first time I've seen analyst reports use the word ahead in the 12 months that I've been in the role,” Sims said. “But we are incredibly conscious of the heavy lifting that we have ahead of us.”

The airline is starting to reap the benefits of more branded fares, which bundle various perks such as extra leg room and on-demand dining, and ancillary fees for meals and baggage. The proportion of WestJet passengers who opted to buy up to a fare higher than the lowest one available increased to 36 per cent in the fourth quarter, up from six per cent at the start of the year, Sims said.

The 23-year-old airline plans to grow passenger capacity by between six per cent and eight per cent — down half a percentage point from its previous guidance — largely through three Boeing 787 Dreamliner aircraft embarking on non-stop service from Calgary to Dublin, Paris and London's Gatwick Airport this spring.

The intercontinental flights will furnish the first of an expected 10 Dreamliners in a bid for business passengers that challenges Air Canada's transatlantic dominance.

Intense competition remains a concern. A freshly expanded Flair Airlines, soon-to-launch Canada Jetlines Ltd., and Air Canada's low-cost Rouge are all crowding the budget airspace that WestJet has flown into with its eight-month-old, ultra-low-cost Swoop.

Sims said Swoop will expand its fleet to 10 planes from six in 2019.

After a turbulent year, labour relations still pose a potential hurdle. WestJet is now in negotiations with two unions that represent dispatchers and its regional airline pilots, while talks with flight attendants are set to begin this year as well. The company is also holding internal negotiations with its mechanics.

Canada's second-largest airline saw the repercussions of labour strife last May, when WestJet pilots voted in favour of strike action before the Air Line Pilots Association and the company agreed to a settlement process two weeks later. The initial threat scared off potential passengers and prompted discounted fare offers that cost the carrier “tens of millions of dollars” throughout the second and third quarters, Sims said last year.

"Throughout 2018, we faced compounding headwinds that resulted in our business delivering results well below where we could and should perform," he said Tuesday.