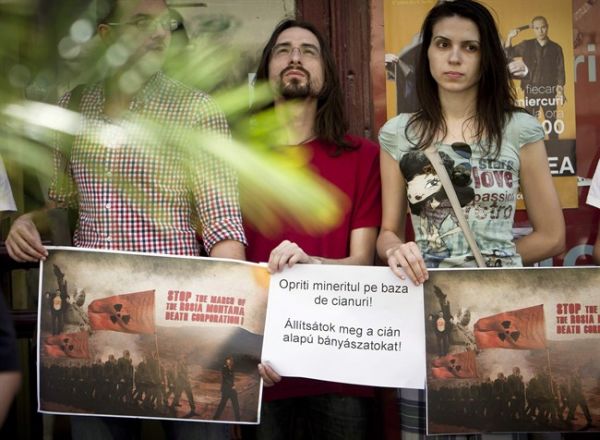 OTTAWA - Gabriel Resources (TSX:GBU) needs quick progress on a new mining law in Romania or the company will be forced to do something "radically different" with its controversial gold project, the company's chief executive said Tuesday.

A draft bill that specifically would have allowed the Rosia Montana project, one of Europe's biggest gold mining projects, to go ahead was rejected by a Romanian parliamentary commission last week.

The project has faced significant opposition over its planned use of cyanide to extract the gold and silver from the ore, and years of debate on the value the foreign investment and jobs would bring to the country's economy.

However, a report by a special committee of Romania's Chamber of Deputies and the Senate have proposed a broader legal framework for gold and silver mines, such as Rosia Montana.

"It can't be two steps forward and one step back for the next six, nine or 12 months. We need to see Romania making a clear vision for itself to move forward with a modern mining industry."

He did not define what "radically different" would mean, but said the company was looking at all options.

"Today, we're being very supportive of the Romanian government in all of their dilemmas and we still spend a significant amount of money in the Romanian economy, but we need to see an expeditious solution that allows us to bring this project forward," Henry said.

Financial analysts have become increasingly skeptical of the company.

"In the end, we don't believe Gabriel will be granted all the licences/permits/legal authorizations needed for construction of the project in the next 12- to 18-month period," analyst Cosmos Chiu wrote in a report.

Shares in the company closed down five cents at 82 cents on the Toronto Stock Exchange on Tuesday.

BMO Capital Markets analyst John Hayes said it was impossible to judge the outcome of the permitting process for Rosia Montana given the constantly shifting climate.

"This failure to achieve a decision adds to a long list of stalls and delays for the project," Hayes wrote in a note to clients following the most recent decision.

"The rejection of the bill by the commission is reminiscent of the last serious attempt to permit the project that was met by a long-running and incomplete technical review process."

Gabriel has been waiting for 14 years for permits for Rosia Montana.

In 2009, the company estimated the initial capital cost of the project would total $876 million.

The company, which has spent some $550 million so far, currently estimates it will cost US$1.5 billion to bring the project into production and cash-flow positive.