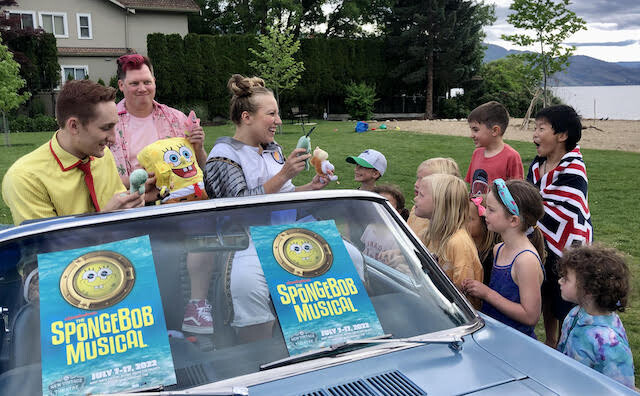 Bikini Bottom is on my list of must-visit destinations this summer.

If you know where Bikini Bottom is, you are a fan of the worldwide Nickelodeon hit cartoon SpongeBob. If you don’t know the tv show, you will be a fan after seeing the Tony Award-winning The SpongeBob Musical, playing July 7 to 17 at the Rotary Centre for the Arts.

While I was working on the heavy, beautiful drama Cabaret, the award-winning director Ryan Grenier, noted musical director Spencer Bach and uber-talented triple-threat choreographer Dawn Ewen were literally rocking out and working on this cult smash hit and having enviable amounts of their own fun.

The play is packed with incredible original music by heavyweights like: Panic at The Disco, Lady A, Aerosmith, David Bowie, Cyndi Lauper, The Flaming Lips, John Legend, and more. Only a team this talented could tackle the complex cavalcade of colourful characters, set and hundreds of props, costumes, crazy set pieces and special effects to recreate the playful undersea world of Bikini Bottom.

While SpongeBob is a character known and adored worldwide, you don’t need to be a kid or a fan to love this charming play with very relevant themes that will leave audiences happy, but wiser.

Several of these artists have returned to Kelowna from across Canada just to work on this incredible, impressive show.

Dress in yellow to celebrate summer and the sunny disposition of SpongeBob, the play’s hero, or if you are a fan, come as your favourite SpongeBob character.

You might not be able to catch a flight to Broadway this summer but New Vintage Theatre is bringing a Broadway quality show to Kelowna. This Okanagan premiere is something to bring your family too, as well as friends and visitors.

The SpongeBob Musical will run July 7 to 17 at the Mary Irwin Theatre in the Rotary Centre for the Arts.

Tickets are on sale at the Rotary Centre For the Arts.