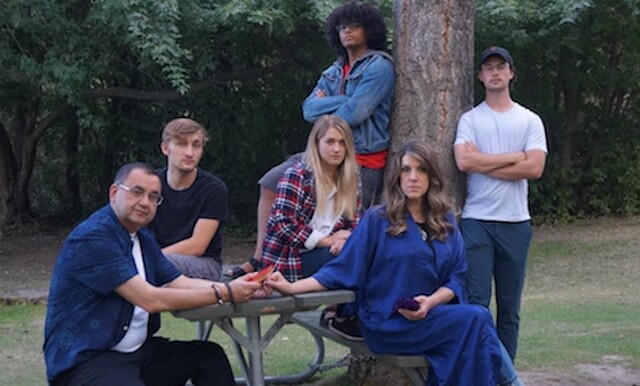 It is exciting and full of unexpected twists and turns. There have been times after our late night rehearsals that I have checked behind me on my walk to the car, but this is not what worries me.

What does is getting people to come and see this amazing production.

Why should you come out and see Dead Serious? Or donate to our theatre company if you can’t?

Here are six reasons why:

A killer cast of six

Our discussions about the flawed and dangerous characters in the play as well as in-depth discussions about cults, mental illness, family dysfunction, drug use and more are invested in their layered, insightful performances.

I am wowed by them at every rehearsal. These actors work needs to be seen — not just by me.

You can only view it live

Playwright Doug Greenall has already sold the movie rights to this play, so you can only see it as a live performance. We will not be taping it, sharing it or streaming it.

However, we did create a very creepy promo trailer for it with James Alton Visuals that you can check out here.
https://youtu.be/KAfiIJZHUKk

Seeing a mystery can give you a needed escape

Dead Serious, first produced at Vancouver’s Arts Club in 1989, is a classic, a murder mystery set at a B.C. family-run lakeside resort, The Blackfly Lodge.

The knives are literally out on this acclaimed show, which has been called “a dramatic scream machine” and “a cool, gripping thriller.”

Live performance offers a unique opportunity to escape the world in a way like no other and Stage Manager Riley Walton and Lighting/Sound Designer Julian Smith have created the haunted resort experience you have only seen in movies or read about in books.

Who doesn’t love a compelling mystery?

Learn how to play “The Game"

The main characters are an unusual brother and sister who continue to play a secret childhood game they call The Game into their teenage years, something only they know about.

After The Game takes a serious turn one night, the sister, Tracey, stops playing. She grows more remote, deciding it is time for her to seek out the friendship of others and avoid her family.

Her brother, Seymour, feels hurt, and retreats into his own world, but now and then tries to lure her back into the excitement they had felt as kids.

Where is the kids’ mother while all this is going on? Eve has problems of her own as she struggles to beat a prescription drug addiction with the help of a handsome and hypnotic spiritualist named Ted.

Ted not only helps Eve with her addiction, he becomes her lover, and, much to the kids’ protestations, decides to move in. This is not a happy family unit, it is one full of dark secrets and lies that include murder.

We are facing a worldwide crisis in the arts. Our work is a precarious passion in the best of times; completely dependent on the participation of audience members who purchase tickets to see our shows.

Without that income we cannot pay our artists, rent for the theatre or our studios or do future shows. It is as simple as that.

It has been almost 25 years since I first saw Dead Serious and five years since New Vintage Theatre first produced it in 2015.

The cast, crew and director have all changed and I still can’t wait for the thrill of being on the edge of my seat once more. If you love a fantastic murder mystery, horror, or thriller, you really should join me.

If you can’t see it live, consider donating. Because it is really scary to think about a future without live theatre.

For more information or to donate, check out www.newvintage.ca