There are rules to follow when using HOV lanes 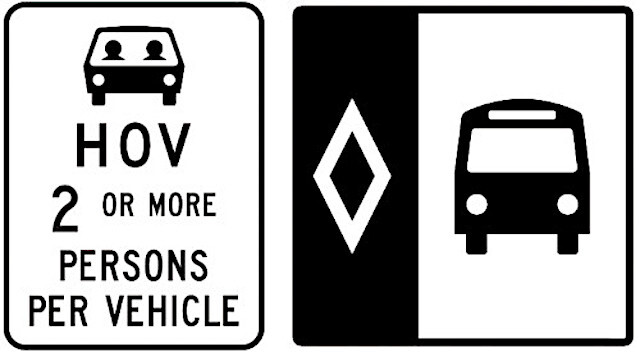 Vehicles carrying more people than just the driver are a relative rarity on our highways.

Some estimates place them at less than 10% of the total number of vehicles on the road.

In order to encourage the efficient movement of more people, High Occupancy Vehicle (HOV) lanes were created. There is an added benefit, filling up vehicles means a "greener" journey as well.

Don't confuse HOV and bus lane signs. The sign on the left above is an example of an HOV lane sign, while the sign on the right identifies a bus lane. HOVs do not qualify to use bus lanes.

In order to use an HOV lane, you must qualify as a high occupancy vehicle, which in B.C. is defined as a bus or any other type of vehicle under 5,500 kg GVW, carrying the required number of persons as indicated by the sign controlling the HOV lane.

If your vehicle fits the definition, you may find yourself travelling at speed in the HOV lane while others who do not qualify must crawl along in the other lanes.

Motorcycles are exempt from having to qualify, according to the sign and may use HOV lanes unless specifically prohibited by posted signs. Electric vehicles that display an exemption decal are also able to use HOV lanes, even if there is only one occupant.

Other exemptions include emergency vehicles, tow trucks responding to a breakdown or emergency, taxis (but not ride hailing vehicles) and cyclists.

In municipalities, HOV lanes are on the right hand side of the street. On freeways they are on the left.

You must enter and leave HOV lanes only when the line between lanes is a broken line. The solid line confines you to the lane otherwise.

You may also find signs directing you to make a wide right turn to avoid entering designated curb lanes.