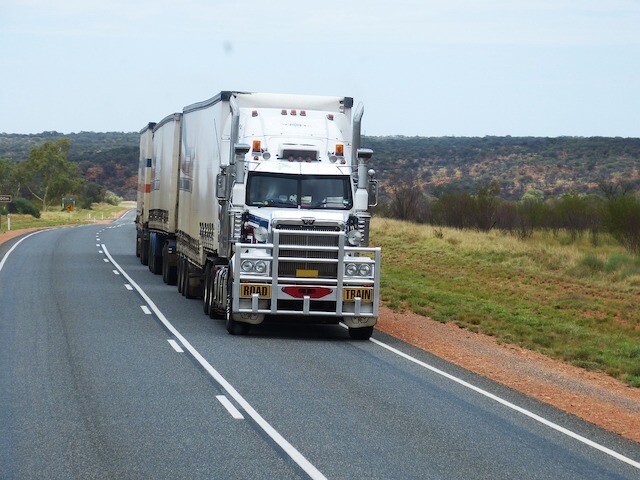 I've noticed something that concerns me in my travels lately, and that is the single long, narrow, curved tire marks that begin about two thirds of the way into a corner and end when the curve does.

They don't appear in the traffic lane in the lateral position that one would expect of a vehicle travelling where it should either. These are weight shift marks and indicate a heavy transport truck on the edge of overturning.

Heavy trucks are a different sort of beast when it comes to travelling around a corner.

In your car or light truck if you travel into the curve at too high a speed you begin to yaw because there is not sufficient friction available to stick your tires to the road and force your vehicle to follow the curve.

Heavy trucks have a much higher centre of mass and are acted on differently by the forces encountered in the curve. Before their tires lose traction on the road surface the forces through the center of mass are sufficient to tip the combination over, starting at the rear end.

When this occurs, tremendous forces act on the last set of tires that are on the outside of the curve. The heat generated between the tire and road surface leaves the characteristic tire marks that I am talking about. Often these marks appear either further to the right than usual, or in the oncoming lane, perhaps indicating that the driver is not attempting to keep proper lane position to start with.

Collision reconstruction will make use of these marks in the tip over formula to calculate the speed of the truck. Evidence required from the collision scene needed is the radius of curvature of the mark, the track width of the trailer, the height of the trailer center of mass and the gravitational constant.

Using the radius of the curve for the outside tire in it's proper lane position instead of the mark results in the maximum speed for that vehicle to safely negotiate the corner.

If you don't find the truck laying on it's side at the end of these marks, you know that it has been driven around the curve on the ragged edge of tipping over, but the driver and other road users have been lucky, this time.

I've been on the outside of the curve once in my service, and watching that truck heading for me with the white smoke pouring off the edges of the outside tires is an experience I hope you never share.