Equipment needed to warn others of a vehicle breakdown

Warning of a breakdown 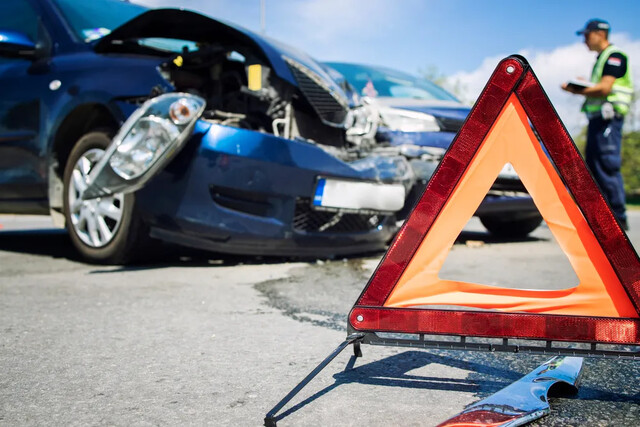 What do you have stored in your vehicle to protect yourself in the event of a breakdown or collision?

Most of will probably say they don't have anything prepared for this eventuality.

In fact, with the reliability of vehicles today and perhaps not having been involved in a significant collision before, we may be lulled into thinking that we don't really need it.

Cole Notter may have felt this way. His actions, or lack thereof, were the subject of a court case after he was involved in a single-vehicle collision and left his black Kia sitting across one lane of Highway 1, east of Chilliwack, at night, with no lights on and did nothing to protect others.

Others stopped to offer assistance, parking on the opposite side of the road with their hazard flashers on.

Edward Godbout approached the scene driving a loaded tractor trailer unit. Thinking that the hazard involved the vehicle with the hazard flashers on, Mr. Godbout changed lanes away from it. He failed to see the Kia in time and was unable to avoid a collision.

That collision left Mr. Godbout's truck and trailer laying on it's side in the median and the load of scrap metal strewn across the westbound lanes.

The judge found Notter 100% liable for the collision involving Godbout because he did nothing to warn others of the hazard he created. The settlement amounted to almost $600,000.

Section 207 of the Motor Vehicle Act requires motor homes and commercial vehicles with a seating capacity of more than 10 passengers, or an overall width greater than 2.3 meters (about 7' 6”), must carry at least two approved warning devices in the driver's compartment.

While it may not be mandatory for other vehicles, it is still a good idea to equip yours with breakdown warnings to protect both yourself, your passengers and other road users.

A set of breakdown warnings is not a significant expense. Shop carefully and you can equip yourself well for less than the cost of an oil change.

If you ever need to use your breakdown warnings, a bit of thought is required for their deployment.

The higher the speed, the further away the first warning should be placed from the scene. Remember that drivers need to see the warning, decide what they need to do and then do it, all before they arrive at the scene.

Our freeways may have posted speeds of 120 km/h (or just over 33 metres per second.) Four seconds for perception and reaction is not out of the question and that means more than 120 meters will be traveled before the driver applies the brakes. If it's slippery, the braking distance could be significant too.

Hills, curves and multiple lanes may require extra warnings, so I would suggest a minimum of three devices would be wise to have.

If you break down and put out your warnings, staying in the vehicle may not be a good idea. Waiting well off the roadway is the safest choice.

Of course, sometimes weather or other conditions may not permit this. But think twice about remaining closer to traffic than you really need to.