The difficulty with stop signs 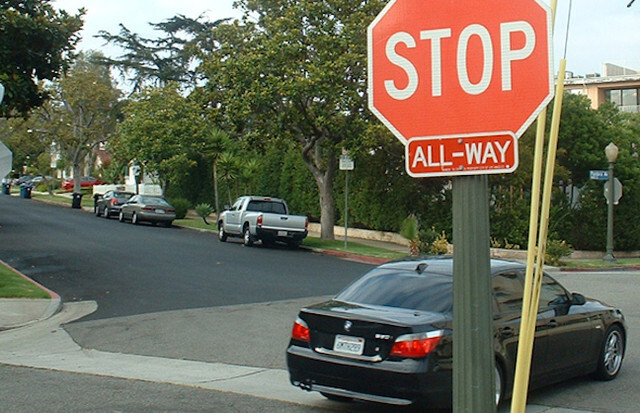 One wouldn't think that stopping at a stop sign would be such a problem for drivers. It seems relatively simple, come to a complete stop, look both ways and then go if it is safe to do so. With the poor compliance rate, we should ask is the stop sign the best form of traffic control for intersections that are not controlled by traffic signals?

Let's examine what making a proper stop means and where it has to be done. You may be surprised to learn that the stop sign itself simply tells you what you must do, not where you have to do it.

The simplest case is one where there is nothing at the intersection other than the stop sign. Here one must stop before entering the intersection itself and in a position nearest to the crossroad where a driver has a clear view of traffic approaching on that crossroad.

Where there is a marked crosswalk along with the stop sign a driver must stop before entering the crosswalk. Doing so will protect against a collision if the driver has failed to notice any pedestrians present.

The stop sign with a marked stop line seems to be the most difficult. Stop lines never seem to be placed at a point where the driver has a good view to the left and right if they stop as required. Consequently, stop lines are often ignored completely. The proper thing to do here is to stop at the line, move ahead to a point where you can see properly, stop again and then proceed after looking both ways to insure it is safe to do so.

Death by Stop Sign is an article in Psychology Today authored by John Staddon. He singles out the stop sign saying:

Look at the familiar stop sign. It does two bad things: First, it makes you look at the stop sign rather than the traffic—it distracts. Second, it doesn’t tell you what you need to know. It tells you to stop even when you can see perfectly well that there is no cross traffic. It shouts “don’t trust your own judgment!”

Dr. Staddon provides Britain as an example of how it should be done. Stop signs are a rare item beside their roads he says, you will find yield signs or their equivalent road markings instead. They have a lower collision rate than North America and yielding instead of stopping saves time and reduces pollution.

He also hints that the roundabout would be preferred over both stop and yield signs. These intersections can reduce collisions by 37% and fatal collisions by 90%.

So, until roundabouts become common in British Columbia, keep in mind that more than half of all collisions happen at intersections. Following proper stop sign etiquette places you in control in a high hazard area.

More Behind the Wheel articles