You know when you were growing up and your mom or dad told you not to crack your knuckles because they would grow uncontrollably (not true) or not to stare into the sun because it would damage your eyes (likely true)? There are many things like eating your vegetables and taking your vitamins that we get told to do at an early age that has no discernable immediate impact but we are told to do it anyways. Fast forward 10 years and it seems like all the things we were told to do then are now terrible for us….hello low fat diets. 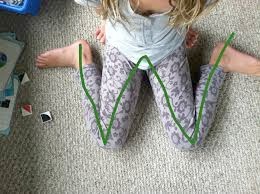 One of the items however that has actually been pretty consistent in growth and development is the 'W' sit for kids. This is of particular interest to me not only as a chiropractor but also as a father of one extremely flexible (and small) 4-year-old son whose favourite position is the 'W' sit. For those who don’t know what this is, sit on the ground in a kneeling position with your feet tucked under your bum. Then slide your feet out so that your bum can sink to the floor. Sounds awful right? And most adults can’t even come close to sitting like this because we simply do not have the muscle flexibility to do so.

I was first exposed to the idea that this was potentially harmful many years ago in pediatrics class in chiropractic school and then again several years later during a Dynamic Neuromuscular Stabilization course. Since that time, I have watched my son (who is made of rubber) naturally adopt this position and it has been a battle to undo.

Lots of young kids have the ability to do this and they love it because it allows them to sit up tall and be stable in the trunk while playing with toys. There are some problems with this position however and realistically it should be avoided.

The main long-term problem with this position from a structural view is that it causes tremendous internal rotation of the hip joint; which if allowed to continue can cause structural damage to the head of the femur and the acetabulum. Down the road, it can cause significant pain and be a culprit for an early hip replacement. It also can also contribute to tightness of the external hip and hip adductor muscle groups, since they are in a continuous shortened position with the 'W' sit. Lastly, because they are sitting in a relatively supported position, the kids do not have to actively use many of their “core” stabilizing and rotating muscles to accomplish their playing which can be detrimental to their overall motor development with tasks such as reaching across midline.

Teaching your kids to not rely on this position is easier said than done. For a lot of them (including my son), it is their default playing position and can be hard to correct. Kids who use this position love it and realistically it is probably the best position for them to do what they want; which is play. The alternatives such as criss-cross apple sauce, or sitting on your feet simply are not as comfortable for them and not as ideal for reaching for toys. This is a battle you as the know it all parent, however should be consistent with and encourage in a positive manner by showing alternatives instead of just saying “don’t sit like that”. My son still will often default to this position, however when reminded of it he will go through all the alternative postures for me. So it is not like he is unaware of the better strategies, he just doesn’t always listen to me. Apparently 4 year olds have an issue with that.


More Back to Basics articles

Dr. Nimchuk graduated from Logan College of Chiropractic and has been practicing in Kelowna since 2008.  Dr. Nimchuk is one of a few full body certified Active Release Technique practitioners in the Okanagan Valley. It has become known as a very effective treatment for muscle and nerve in athletics with almost every professional sports team in North America retaining the services of an ART certified Chiropractor. Dr. Nimchuk has worked with athletes ranging from weekend warriors to Olympic champions and brings the same philosophy and treatment approach to every patient.

In addition to being a chiropractor, Dr. Nimchuk is also registered as a Certified Exercise Physiologist with the Canadian Society of Exercise Physiology, which is the highest level of professional fitness certification available in Canada.

In addition to private practice, Dr. Nimchuk works with both the Royal Canadian Mounted Police and the Canadian Border Services Agency as a consultant to assist recruits and members reach and maintain the required health and fitness for their work. Dr. Nimchuk also a frequent speaker to business organizations and community groups on topics such as injury prevention, ergonomics and workplace health.