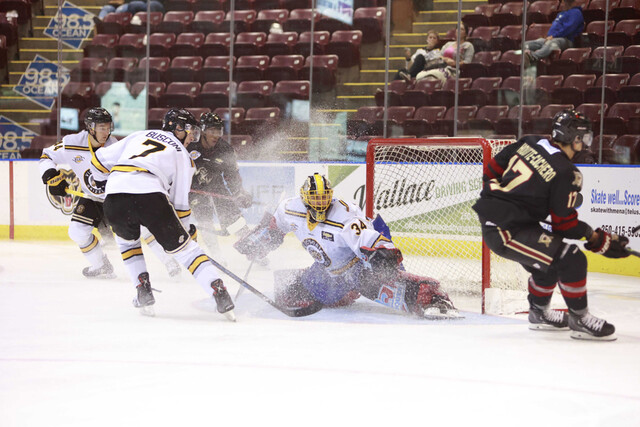 Justin Katz has to know his time will come...soon.

The second year goaltender once again came within moments of his third career BC Hockey League shutout.

As it is, he'll have to settle for another solid performance, leading the West Kelowna Warriors to a 5-1 victory in Victoria and a 2-0 start to the regular season.

Kallus Green and Brennan Nelson each scored twice in the win, while rookie Michael Salandra assisted on hour goals to pace the Warriors offensively.

Green opened the scoring with his first BCHL goal seven minutes into the game.

Salandra gathered a loose puck and fed Green, who teed up a one-timer past Ansel Holt in the Victoria net.

Green doubled the lead six minutes later, taking a pass from Matthew Lee, outwaiting Holt and burying his second from the right circle.

The Warriors doubled the lead in the second. Nelson scored his first of the night on a breakaway, the Jake Bernadet scored his first in the BCHL, converting a feed from Salandra on a two-on-one.

Nelson made it 5-0 seven minutes in the third but, as was the case the night before, were unable to secure the shutout for Katz.

With less than three minutes left, Jacksenn Hungle was sent in all alone after exiting the penalty box, and beat the Warriors goaltender with a wrist shot.

Katz earned his second win of the season, turning away 21 of the 22 shots he faced.

The Warriors now return home to prepare for their home opener Friday against the Wenatchee Wild. The Warriors will wear special orange jerseys during the game in recognition of Truth and Reconciliation Day.