Warriors open on the road 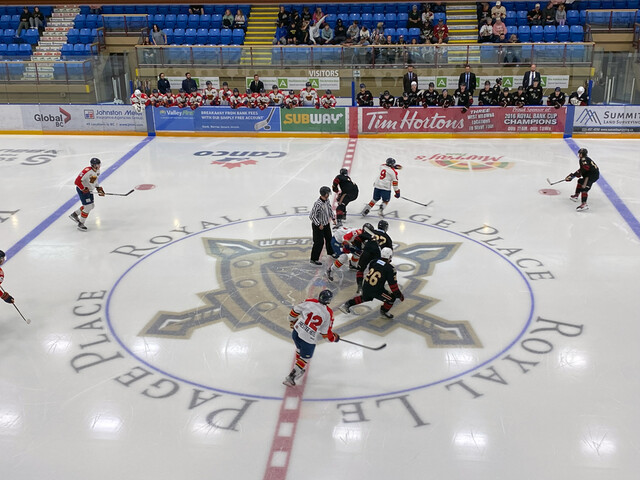 Given the choice, most hockey coaches would likely prefer to open up a season on the road and away from familiar surroundings.

"Everyone likes to get out of town and get out of their element and get together," said head coach Simon Ferguson.

"We had a couple of trips where the guys are together. But, more than that, being able to compete and push each other and demand that each player holds up their end of the bargain."

The Warriors left Thursday for Vancouver Island and a brief two-game Island Division road trip to kick off the season.

They're in Duncan to face the Cowichan Valley Capitals Friday and Victoria Saturday.

The kickoff to the season comes at the end of three weeks of training camp and practice, along with a scant three pre season games.

The Warriors will try to shake off a less than stellar pre season when they open things up Friday. West Kelowna struggled to a 1-2 record over the three games with the win a 9-7 shootout in Chilliwack.

"We have a lot of new players and have to start from scratch with everybody. We know it's going to take a little bit of time getting everyone on the same page," added Ferguson.

"When you have 13 or 15 players returning, you start a little further ahead for sure. For us, it was learning we had to start from scratch and re-establish everything"

Ferguson said that includes everything from culture to work ethic to the coaching staff determining who works best together up front and on the blueline.

He said he did see a lot of good things during the pre season... things he hopes the team can build on early in the new season.

The Warriors will return home after their brief road trip to prepare for next weekend's home opening weekend.

They'll host Wenatchee on Truth and Reconciliation night Friday, followed by a visit from Penticton Saturday on a night when the team will pay tribute to the late Parm Dhaliwal.