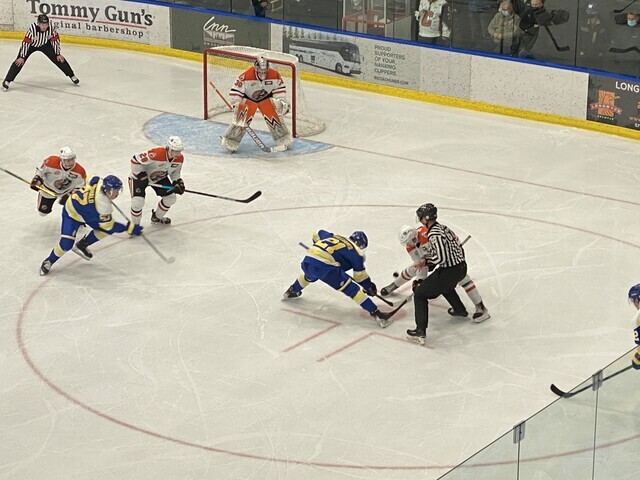 Photo: File photo
A Vees vs. Clippers game in November, 2021

As the Penticton Vees prepare to face off against the Nanaimo Clippers for the Fred Page Cup, the mayors of both cities have agreed the losing side will have to suffer a little extra.

Nanaimo Mayor Leonard Krog and Penticton Mayor John Vassilaki have agreed that the losing mayor will have to provide three things amongst their team's defeat.

First, the losing mayor will wear the winner’s jersey during the next regularly scheduled council meeting after the playoffs.

Second, the losing mayor will donate $100 to the winner’s charity of choice.

“Blue is going to look good on Mayor Krog and I’m looking forward to those tasty Nanaimo bars,” Vassilaki said in a press release.

“This is just a fun way to support all the hard work that the players on both teams have put in over the last year. Each team has faced a lot of obstacles and both Councils are proud of all they’ve accomplished. But there can only be one winner: Go Vees, Go!”

Game one of the finals starts this Friday at 7 p.m. at the South Okanagan Event Centre.