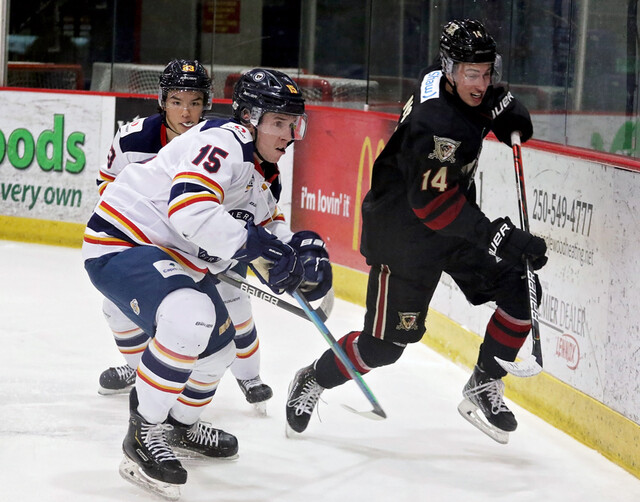 The West Kelowna Warriors will look to exercise some demons when they face off with the Vernon Vipers in their opening round BC Hockey League playoff series Friday.

It's been six years since the Warriors last won a seven game playoff series. Their last victim, the Chilliwack Chiefs, whom they sent packing in six games en route to the RBC Cup.

There were no playoffs during the COVID-shortened 2021 season.

The Warriors also come into this series never having beaten the Vipers in the playoffs.

The Vipers on the other hand eliminated Wenatchee in five before the 2020 season was called off due to COVID.

They made it all the way to the league final the previous year before losing in four straight to the Fred Page Cup champion Prince George Spruce Kings.

Both teams enter the post season on a bit of a roll.

The Warriors on a franchise-record 10-game winning streak, while the Vipers were 7-3 over the course of their final 10.

Two of those three losses came at the hands of the Warriors, who won four of the five meetings between the two teams during the regular season, and both games at Royal LePage Place by a combined 11-2 score.

John Evans led the way for the Warriros during the five-game regular season series, with four goals and four assists. Defenceman Nicholas Ardenaz had seven assists.

Regan Milburn was the top Vernon sniper, scoring once and adding three assists.

The Warriors come into the series minus the services of forward Felix Trudeau for the first two games as he completes a five-game suspension.

The opening two games of the best-of-seven will be played Friday and Saturday at Royal LePage Place, before sifting to Vernon for games three and four next Monday and Wednesday.

Meantime, this will be the first year since its inception in 1971 that the BC Hockey League will not compete for a national championship.

The BCHL lost the right to compete for the Centennial Cup after withdrawing from the Canadian Junior Hockey League, which oversees the national championship, last year.

The league has still refused to comment on the ramifications for the league moving forward, stating in a request for more comment this week it is not in a position to comment publicly.

There has been speculation the BCHL may look to compete with the United States Hockey League in the future, however, that has not been confirmed.