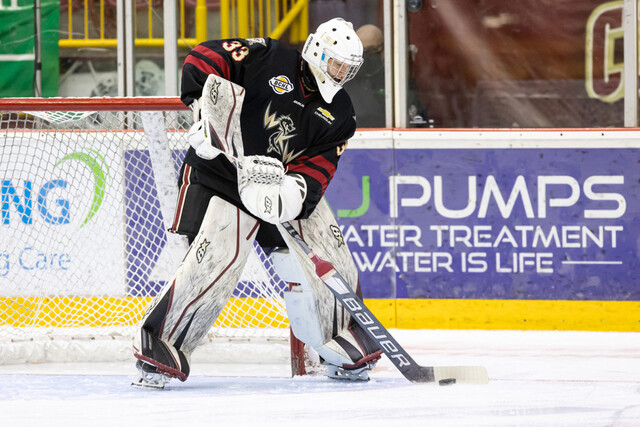 The West Kelowna Warriors bounced back in a big way Friday night.

Felix Trudeau had a four-point night, including his first career hat trick leading the Warriors to a 7-3 victory over the hometown Smoke Eaters in Trail.

The Warriors, who lost 6-3 at home to Penticton Tuesday, have yet to lose back-to-back games thus far this season.

The team were tied 1-1 after a wild first period in which the goaltenders faced a combined 39 shots. The Warriors held a 20-19 edge after 20 minutes.

They trailed 2-1 early in the second, scoring six unanswered goals over a span of 33 minutes to win going away.

Former Smoke Eaters captain Chase Defoe tied it with his first of two, then Jayden Price put the Warriors up for good with his first in a Warrior uniform, deflecting home Charles-Alexis Legeault's point shot.

A minute later, Elan Bar Lev Wise closed out the second period scoring on a breakaway.

Dafoe, then Trudeau with back-to-back goals to complete the hat trick rounded out the Warriors scoring.

Trudeau added an assist as well to stretch his consecutive game point streak to 13 games.

Bar Lev Wise had two assists to go along with his goal while Tyler Rubin added three assists.

Tyler Cristall picked up an assist improving his point streak to 15 straight games, one shy of the team record of 16 set by Liam Blackburn during the 2015-2016 season.

Johnny Derrick turned away 44 shots to earn his 10th win of the season.

The Warriors will host Cranbrook Saturday at Royal LePage Place, a game which will feature a wedding during the first period intermission.