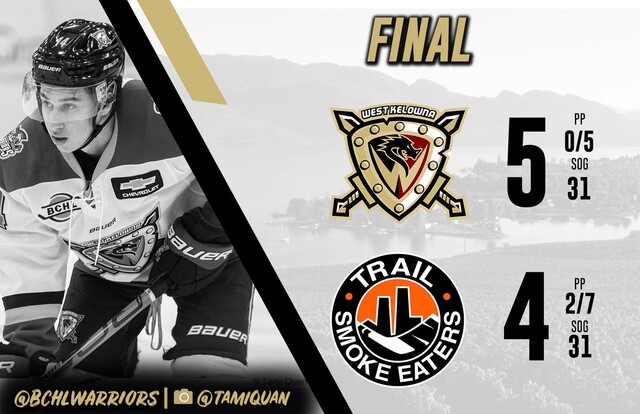 The win allowed the Warriors to kick off a three-game Kootenay road trip on a winning note, while also snapping a long losing streak against the Smoke Eaters.

Prior to Wednesday, Trail had won seven in a row against the Warriors, and hadn't lost inside Cominco Arena since Oct. 20, 2018.

Alexi Van Houtte-Cachero and Felix Trudeau each picked up a goals and an assist while Elan Bar Lev Wise also scored.

The game went back and forth all night long with both teams taking turns holding one-goal leads.

Bar Lev Wise opened the scoring for the Warriors just 45 seconds into the game before Trail tied it minutes later.

John Evans with his first restored the one goal lead before Trail again came back when Teddy Lagerback beat Johnny Derrick on a Smoke Eaters power play.

Trail took their first, and only lead midway through the second as the Warriors ran into penalty trouble. With Pat Lawn and Tyler Rubin both in the box, Quinn Disher put the home side up on a five-on-three advantage.

But, Evans got that one back just 22 seconds later with the Warriors first shorthanded goals of the young season, beating Evan Fredette from the top of the left circle while using the defenceman as a screen.

Consecutive goals from Van Houtte-Cachero in the second and Trudeau 58 seconds into the third gave the Warriors a two goal cushion.

Trail cut into the lead 13 seconds after Trudeau's goal, but Derrick shut the door the rest of the way.

Both teams managed 31 shots in the game.

The Warriors struggled on special teams again Wednesday. They went 0-5 with the man advantage while giving up two goals on seven chances on the penalty kill.

West Kelowna continue its three game road trip with back-to-back games in Cranbrook against the Bucks Friday and Saturday.